In this unit: After leaving the palace, Siddhartha was determined to discover the meaning of existence. He studied with the best teachers of the day, and lived the hard life of an ascetic. Yet he didn’t feel any closer to the Truth. The turning point came when he almost died of hunger. Soon after that, he attained enlightenment under the Bodhi tree.

Living as a Monk

At the age of 29, Siddhartha began the homeless life of a monk. From Kapilavatthu, he walked south to the city of Rajagaha, the capital of the Magadha country. The king of this country was named Bimbisara.

The morning after Siddhartha arrived, he went to the city and obtained his meal for the day by going from house-to-house begging with an alms-bowl.

Siddhartha wandered along the Ganges River looking for spiritual teachers. Alara Kalama and Uddaka Ramaputta were considered to be the best teachers in meditation at that time so Siddhartha went to study with them.

First he studied under Uddaka Ramaputta, then under Alara Kalama. Very soon he had learnt all they had to teach, but he had not learnt to end suffering. He said to himself, “I must find the truth on my own”. 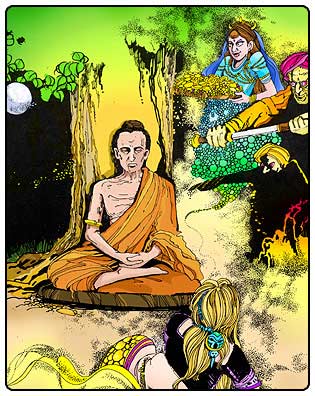 With his five friends, Siddhartha went to a forest near the village of Uruvela. Here, several holy men were living in and tormenting themselves with extreme poverty. They believed that if they put their bodies through terrible physical hardship, they would understand the truth. Some slept on a bed of nails. Some stood on their head. They all ate so little they were just skin and bones. Siddhartha found a quiet spot on the banks of a nearby river. There he practised the most severe hardship. He slept on a bed of thorns. He ate only one grain of wheat and one sesame seed a day. At other times, he would eat nothing at all. His body wasted away until there was only a layer of thin skin covering his bones. Birds made nests in his matted hair and layers of dust covered his dried-up body. Siddhartha sat completely still, not even brushing away insects.

The Song of the Lute

One evening, a group of young girls on their way home passed by Siddhartha who was sitting in meditation. They were playing lutes, a musical instrument, and singing. He thought, “When the strings of the lute are loose, its sound won’t carry. When the strings are too tight, it breaks. When the strings are neither too loose nor too tight, the music is beautiful. I’m pulling my strings too tightly. I cannot find the Way to Truth living a life of luxury or with my body so weak.” Thus, he decided to give up self-torture. He came to know that this was not the correct way. Soon after, while bathing in the river, Siddhartha was so weak that he fainted and fell. Sujata, a young village girl who lived by the river, saw him and brought him a bowl of rice and milk. After his meal, he immediately felt stronger and continued his meditation. When his five companions saw him eat, they were disgusted, thinking he’d given up. So they left him.

The Sun of Enlightenment Shines

Siddhartha remembered meditating under the rose-apple tree when he was a child. “I shall meditate as I did before. Perhaps that is the way to become enlightened.” From then on he began to eat daily.

Still seeking a way to understand the meaning of life, Siddhartha set out for Buddhagaya. Near a grove, he sat down under a huge Bodhi tree. Silently he vowed, “Even if my flesh and blood were to dry up, leaving only skin and bones, I will not leave this place until I find a way to end all sorrow.” He sat there for forty nine days. He was determined to discover the source of all pain and suffering in the world. Mara, the evil one, tried to scare him into giving up his quest. For instance, he hoped to lure Siddhartha into having selfish thoughts by sending visions of his very beautiful daughters. But the Buddha’s goodness protected him from such attacks.

During this period, Siddhartha was able to see things as they truly were. Now he had finally found the answer to suffering: “The cause of suffering is greed, selfishness and stupidity. If people get rid of these negative emotions, they will be happy.“

During a full-moon night in May, Siddhartha went into deep meditation. As the morning star appeared in the eastern sky, he became an enlightened one, a Buddha. He was thirty five years old.

When the Buddha stood up at last, he gazed at the tree in gratitude, to thank it for having given him shelter. From then on, the tree was known as the Bodhi tree, the tree of Enlightenment.

Congratulations!
Now that you have
finished unit 3, why not see what you have learned by doing the unit 3 Quiz?