In this unit: After his enlightenment, the Buddha was in two minds about teaching the Dharma because it’s so profound. But he soon realised that there were lots of people like him who also wanted to learn the Truth of existence, so he decided to teach after all. His first – and most important teaching – was on the Four Noble Truths.

The Buddha decide to teach

After a long rest, the Buddha began to plan what to do in the future. He thought: “Although the Dharma is deep and will be difficult for most people to understand, there are some who only have a little craving. Such people may be able to accept it.

So I should not keep this truth a secret. I should make it known everywhere, so that all people can benefit from it.” 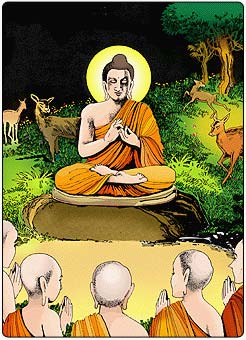 Teaching the Dharma to the Five Friends

The Buddha decided to first teach the Dharma to his five friends who had taken care of him during his six years of struggle for Enlightenment.

The Buddha walked slowly to the Deer Park in Sarnath near Varanasi where they were staying. His five friends were Kondanna, Bhaddiya, Vappa, Mahanama and Assaji.

When they saw the Buddha, they refused to welcome him, thinking that he was enjoying a sensuous life. However, as the Buddha walked closer to them, they were attracted by his calm look.

They finally agreed to sit down and listen to him. Then for the first time, the Buddha taught the Dharma or the Four Noble Truths to his five friends, known as the turning of the “Wheel of the Dharma”.

What is the Dharma?

Dharma means Truth and is sybolised by a wheel. The Dharma Wheel is a symbol of the continuous spreading of the Buddha’s teachings to help people live more happily.

The basis of the Buddha Dharma or the Buddha’s teachings are the Four Noble Truths:

1. The Truth of Suffering

2. The Truth of the Cause of Suffering

3. The Truth of the End of Suffering

4. The Truth of the Path leading to the End of Suffering

When we get sick, we go to a doctor. A good doctor first finds out what illness we have. Next he decides what has caused it. Then he decides what the cure is. Finally, he gives the medicine that will make us well again.

Look at the table to see the connection between a doctor and the Buddha.

Congratulations!
Now that you have
finished unit 4, why not see what you have learned by doing the unit 4 Quiz?