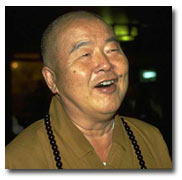 THE INAUGURAL DECLARATION OF BLIA

Due to rapid changes in society brought forth by technological advancements of the modern era, unsettling conditions are always a factor influencing the world surrounding us. It behooves us, therefore, as Buddhist practitioners of the Mahayana tradition, to shoulder the responsibility of providing answers to this dreary but true state of affairs. As such, we hereby solemnly declare the following:

We are indebted to the Buddha’s teachings and sincerely respect the Triple Gem; we propagate to benefit all sentient beings and strive to enlighten the world.

We promote Living Buddhism and create a Buddha’s Light pure land; we are pragmatic in worldly affairs and compassionate in providing relief to the world.

We observe established formalities and harmonize with the Five Dharma Vehicles; we cultivate the Three Studies for a wholesome character.

We work with an international outlook and engage in cultural and educational activities; we are broad-minded and respect the multitude.

From monastic to laity:
To extend to lay followers the opportunity to support the Triple Gem, to spread the Buddhist culture, and to propagate the Dharma.

From monasteries to society:
To penetrate society and the human mind; let compassion, moral discipline, wisdom, and mindfulness be the source of strength for purification of the human spirit.

From self-cultivation to helping others:
To encourage fellow Buddhists to practice the dual cultivation of happiness and wisdom for self-enlightenment, and at the same time, rely on compassion and knowledge to benefit others.

From passiveness to involvement:
To emulate the spirit of the Buddha by being active and optimistic in dealing with life, thus giving others confidence, hope, joy, and convenience.

From disciples to teachers:
To train lay followers in skill and wisdom through educational programs so that they too can be competent propagators.

From our country to the world:
The Mahayana spirit is “to emancipate all beings prior to self-salvation.” We are to follow this glorious tradition with firm conviction and a vision that extends across the world. Let us strive to realize the ideal of “letting the Buddha’s Light shine over the three thousand realms and the Dharma’s current flow throughout the five continents.”

After arriving in Taiwan in the spring of 1949, the Ven. Master became the chief editor of Life Journal, Awakening The World, Buddhism Today, and a host of other publications. In 1952, while staying at Lei-yin Temple of Ilan, he initiated chanting groups, student and youth organizations, children’s Sunday school, and various Dharma teams that eventually laid the foundation for his future efforts in Buddhist propagation.

In 1957, the Ven. Master established a Buddhist cultural center that became today’s Foguang Cultural Enterprise Co., Ltd. in which a variety of Buddhist books are being published with training tools such as audio and visual aids. Subsequently, the founding of Fo Guang Shan Buddhist Order in 1967 actualizes the Ven. Master’s vision of Humanistic Buddhism via education, cultural activities, charity, and religious practices that “foster talent, propagate the Dharma, provide relief aid, and cultivate morality in people.” Since then, over one hundred and fifty branch temples have been established worldwide. Among them are Hsi Lai Temple, Nan Tien Temple, and Nan Hua Temple, the biggest temples ever built in North America, Australia, and Africa, respectively. In addition to art museums, libraries, publishing houses, and bookstores, the Ven. Master also established a free medical clinic, a Buddhist research institute, two high schools (Chih-kuang and Pu-men High Schools), the Hsi Lai University in the United States, as well as Fo Guang University and Nan Hua University in Taiwan. In 1970, 1975, and 1987 respectively, the “Ta Tzu Children’s Home,” “Fo Guang Light Lodge,” and “Compassion Foundation” were formed to provide for orphans, abandoned children, senior citizens, as well as the poor and needy in Taiwan. Fo Guang Tripitaka Editing Committee was also formed in 1977, and has continued to work diligently toward the publication and advancement of the “Fo Guang Buddhist Canon” and “Fo Guang Encyclopedia.” In 1997, “Excerpts of Chinese Buddhism Tripitaka in Modern Texts” was successfully completed with the “Fo Guang Encyclopedia” on CD, followed by the formation of Buddha’s Light TV Station and Buddha’s Light Internet Network as BLIA advanced in line with modern technology. Books authored by the Ven. Master that are widely distributed include The Life of Sakyamuni Buddha, The Buddha’s Ten Great Disciples, Hsing Yun’s Ch’an Talk, The Buddhism Volumes, Ven. Master Hsing Yun’s Lectures Series, The Buddhism Textbooks, Beads of Pearl – Prayers for Engaged Living, etc.

Today, more than one thousand monastic disciples have been tonsured under Ven. Master Hsing Yun who has over a million followers worldwide. Throughout his life, the Ven. Master has dedicated himself to propagating the ideals of “Humanistic Buddhism” and being “a global person” in which the spirits of joy and harmony, integration and coexistence, respect and magnanimity, equality and peace are widely disseminated. Upon the inception of Buddha’s Light International Association on February 3, 1991, Ven. Master Hsing Yun was elected to assume its presidency. As of 1997, over one hundred international chapters of BLIA have been established to carry out the Ven. Master’s ideal of “letting the Buddha’s Light shine over the three thousand realms and the Dharma’s current flow throughout the five continents.”

Over the years, the Ven. Master has been recognized with numerous awards. In addition to the highly acclaimed honors received in his home country, the Republic of China, the Ven. Master has also gained international prestige for his selfless dedication and contributions. For example, he is the first person from the ROC to be granted an honorary Ph.D. by the University of Oriental Studies in 1978, and was awarded the “Buddhist Gem Award” by the Indian National Buddhist Assembly in 1995. In May of 1997, the Ministry for Internal and Foreign Affairs honored him “the top award” in recognition of his extraordinary contribution to society, his country, and Buddhism at large. In February of 1998, the Ven. Master hosted the Triple Platform Full Ordination Ceremony along with the Five and Bodhisattva Precepts Ceremonies in Bodhgaya, India so as to restore the Theravada bhiksunis precepts, which had been lost for over a millenium. On April 8, 1998, he was bestowed the Buddha’s tooth relic which he personally escorted from India to Taiwan where it would remain. The Ven. Master’s contribution toward Buddhism is truly phenomenal, and has helped Buddhism gain a better understanding from society amidst current trends of institutionalization, modernization, humanism, and globalization.