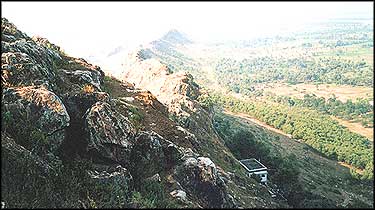 After Prince Siddhartha renounced the world he practised austerities for six years. One of the places he stayed during this period was a mountain that later came to be called Pragbodhi (Prior to Enlightenment) and which is now known as Dhungeswara. Tradition says he sheltered in the small cave half way up this mountain. Today there is a small temple near the cave run by some friendly Tibetan monks. If you climb from the cave to the top of the mountain you will see the remains of several ancient stupas and be rewarded by a great view. You will also be able to see the spire of the Mahabodhi temple in the distance. Pragbodhi is a wonderful place to spend the day or even a few days. The monks will be happy to provide you with a basic accommodation but water is scarce so use as little as you can; you might even consider bringing your own drinking water with you.

The usual way to get to Pragbodhi is to take the bus that plies the old Gaya road following the river, get off at the village of Kiriyama and walk from there.Map Kiriyama is where the second line of power pylons cross the river. The more enthusiastic pilgrim might like to go all the way by foot. To do this head directly east from Bodh Gaya towards the mountains, crossing the Neranjara and Mohana Rivers on the way. When you get to the mountains simply follow them northward until you get to the cave. It is a pleasant walk of about 6 kilometres through very attractive countryside. If you set out at dawn you can arrive at about noon, spend the day at Pragbodhi meditating, sleep overnight and walk back the next morning. You might also like to take with you a copy of the Mahasihanada Sutta and or the Ariyapariyesana Sutta in which the Buddha vividly about his six year quest for truth. Both suttas are in Bhikkhu Bodhi’s The Middle Length Discourses.