Kapilavatthu: The town where Prince Siddhartha grew up 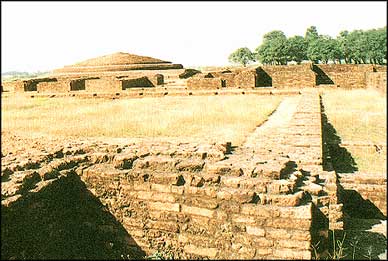 The ruins outside the small village of Piprahwa is now identified with Kapilavatthu, the town where Prince Siddhartha spent his first thirty years. Legend says his father was a great king and that Kapilavatthu was a magnificent city. In actual fact Suddhodana was more like a feudal chief and Kapilavatthu was something like a town clustered around his manor house. The ruins you see today are mainly of the temples and monasteries built in later times.

The stupa was built by the Sakyans over their share of the Buddha’s ashes and was enlarged on several later occasions. Sit under the trees a little to the west and read the profound Madhupindika Sutta from The Middle LeMapngth Discourses which the Buddha taught here. There has been some controversy as to the exact location of Kapilavatthu. Nepal insists that it is in its territory at a place called Taulihwakot. The issue is discussed fully in Middle Land Middle Way. About a kilometre before the ruins is a small Sri Lankan temple that will be happy to offer you accommodation should you need it.