Barabar Hills: Where the Buddhist Emperor Asoka built caves for the Ajivakas 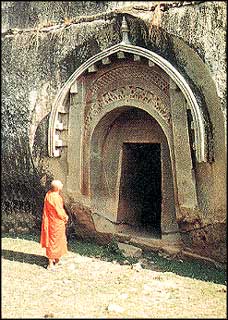 Although the Buddha was the greatest teacher of his time he was certainly not the only one. There was Nigantha Nataputta the founder of Jainism, Purana Kassapa, Ajita Kesakambali, Pakudha Kaccayana and Makkhali Gosala. This last teacher founded a school called the Ajivakas which lasted for some centuries and then petered out. For a review of the doctrines of these and other teachers contemporary with the Buddha see the Samannaphala Sutta in Walshe’s Long Discourses.

Being a sincere Buddhist the emperor Asoka was tolerant of the other religions in his vast realm . Proof of this are the remarkable caves he had cut on the stark and rocky Barabar Hills for the use of Ajivaka ascetics. The most interesting of these is the one called Lomas Rishi Cave. Carved out of a huge rounded granite hummock the facade of this cave is an exact replica of the wood and thatch kutis that ancient ascetics including Buddhist monks used to live in. The interior of the cave is consists of a large rectangular chamber with a remarkable glass-like polish. The whole thing looks like it has been cut out of the rock by a giant laser.

E.M. Foster used this cave as the setting for the dramatic incident in his Mapfamous novel A Passage To India. The two other caves on the hill, Sudama and Chaupar and the one on nearby Nagarjuni Hill cut by Asoka’s grandson, have polished interiors but plain exteriors. The Barabar Hills are about 20 kilometres north of Gaya just off the Gaya-Patna road. When you are finished at Bodh Gaya the next leg of your pilgrimage is to Rajgir some 80 kilometres north-east of Gaya with a stop on the way at Kurkihar.