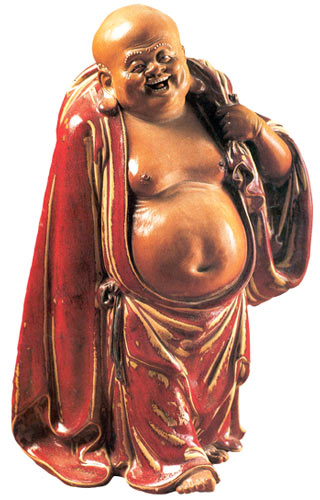 Buddha of infinite life,
Valuable bag containing
secrets of heaven and earth.
Happy and contented,
Cheerful and joyful is he.

According to legend, Angida was an Indian snake-catcher whose aim was to prevent the snakes from biting passers-by. After the snakes were caught, he would remove the venomous fangs and then release them in the mountains. It was due to this kindness of heart that Angida was able to attain enlightenment. He carried a bag to put the snakes in.
He is supposed to have appeared in Fenghua in Zhejiang Province in 907 A.D. as a mendicant monk carrying a bag. He was seen for the second time in China in 917 A.D., preaching on a rock next to the Yuelin Temple.