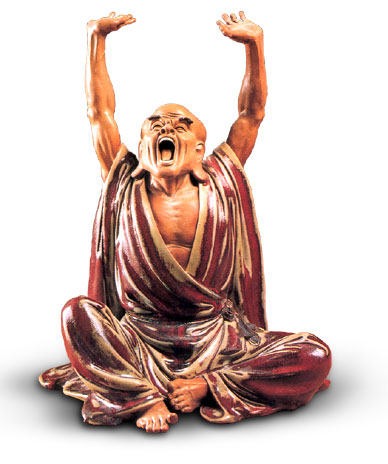 Easy and comfortable,
Yawning and stretching.
In a state of omniscience,
Contented with his own lot.

According to legend , Pantha the Elder was the prince of a small Indian kingdom called Kintota. When he became a monk, he liked to meditate in the half-lotus style. Upon waking up, he would raise his hands and let out a deep breath, hence the name Raised Hand. He was the elder brother of the Doorman Lohan. The two brother were both born while the mother was travelling, and were given a Sanskrit name which means “born on the road.”