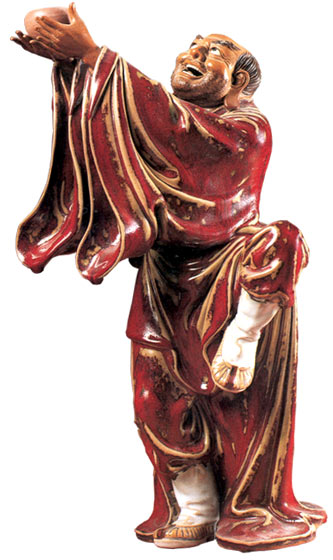 In majestic grandeur,
Joy descends from heaven.
Raised the bowl to receive happiness,
Glowing with jubilance and exultation.

Kanaka the Bharadvaja was a Buddhist mendicant monk who used to ask for alms by raising his bowl. After he had attained enlightenment, he was called the Raised Bowl Lohan. The word alms bowl, bo, was borrowed from Sanskrit, taking the first of the three syllables of the original word, because there was no such a word in Chinese. In the very beginning, the bowl was made of metal. Nowadays, however, the bowl is commonly found to be made of finely polished coconut shell halves or red beech wood. Its use, that of holding alms food, remains unchanged.