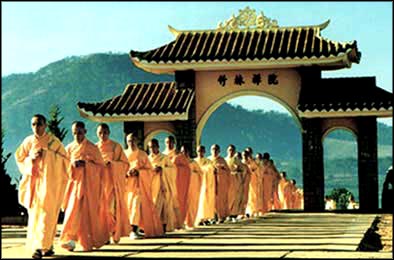 The predominant form of Buddhism in Vietnam is a combination of Pure Land and Zen. Zen practice, with its emphasis on meditation is mostly pursued among the monks and nuns, while Pure Land philosophy and practice is preferred by the lay-people.

Truc Lam’s Zen Monastery, in South Vietnam’s Da Lat City is about 300 km from Ho Chi Minh city. It is located on the Highland which has been famous for its temperate climate and scenery since the time Vietnam was a French Colony.

This is one of the largest Zen meditation study centres in Vietnam, with equally large numbers of nuns and monks. The centre has many English speaking members. The centre is not only popular locally but also among Vietnamese abroad for meditation studies. The centre is under the teaching of the Venerable Thich Thanh Tu, a renowned teacher in meditation over many decades. The Venerable’s teachings and lectures are embraced, practiced and circulated in many different forms of media around the world by Vietnamese BuddhistVenerable Minh Dang Quangs.

In the south there is a sizeable minority of Theravadin Buddhist, mainly among the ethic Khmer people (Khmer Krom), but also among the Vietnamese. Theravadin monks study alongside Mahayana monks at Saigon’s Van Hanh Buddhist University.

There is also a unique Vietnamese form of Buddhism which evolved in the southern provinces, and is a successful combination of Theravada and Mahayana. While much of the philosophy is Mahayana, the Sangha (monks and nuns) follow the Vinaya rules (code of ethics) quite strictly, and go on the traditional alms round every day. As for example, the Venerable Minh Dang Quang (see picture) who was the founder of the Vietamese indigenous Buddhist order .

During colonial times, many hybrid Buddhist sects evolved, and most are still active today, especially among overseas Vietnamese communities. These include Hoa Hoa, a lay-based, militant, form of Buddhist Protestantism, and Cao Dai, a Vietnamese attempt to combine the worlds great religions, which emphasises prophecy and ritual, and is organised along the lines of the Catholic church, with a Holy See, Popes, and Cardinals, etc. 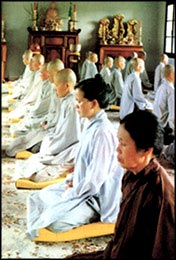 Vietnam was and still is a profoundly Buddhist country. The Sangha are very involved in the community,and temples often run schools, orphanages, medical clinics, and homes for the disabled. Lay people play an important role in religious life. Because of historical circumstances, Vietnamese Buddhists have faced much persecution in the last fifty years.

Most monks and nuns enter at a young age, and within the temples, education is greatly valued and encouraged. Most Vietnamese Sangha go to university, and now some hold jobs as teachers, doctors, lawyers and journalists. Many are also proficient in foreign languages, especially Chinese and English.

The main Buddhist festivals are Vesak (Buddha’s Birthday) and Vulan (Ullambana). Vietnamese traditionally visit the temple on the fifteenth day of the Lunar month (Ram), and also in the various festival days of the Mahayana Buddhas and Bodhisattvas. Committed lay people go through a formal ceremony of “taking refuge”, where they are given a Buddhist name. They wear a traditional grey costume over their normal clothes when they go to the temple, to signify their status as serious Buddhists. There is a large and well organised lay youth movement called “Gia Dinh Phat Tu” (Lit: Family of Buddha’s children) which is similar to the scouts. The official American name of the organization is “Vietnamese Buddhist Youth Association”. This organization has an official website in Vietnamese at: www.gdpt.net.

There is great equality between monks and nuns, as there is between men and women throughout Vietnamese society. Monks are addressed as “Thay” (Teacher), Nuns as “Su Co” (Sister). All Sangha take the name “Thich”, to signify that they have left their worldly family, and have joined the family of the Buddha. Buddhists greet each other by placing their palms together at chest level and saying, “Mo Phat” (Praise Buddha). An alternative form of greeting is to recite the name of Amitabha Buddha.