“Laos is a landlocked nation squeezed between Thailand to the west and Vietnam to the east, and sharing shorter borders with Burma in the northwest and Cambodia in the south. As its position on the map of southeast Asia might suggest, Laos is the product of early contacts between the Khmers of Cambodia and the Thais who eventually established Thailand. As Thai tribes migrated into the southwest Asian peninsula during the latter half of the first millennium, they came first down the Mekong river until they encountered the rear guard of the Khmer tribes who had followed that route before them. Some settled along the upper reaches of the Mekong, while others resorted to the relatively uninhabited Chao Phraya, which flows through the heart of present day Thailand, reaching the sea at Bangkok. The Thai-related people who settled in the upper Mekong region became the ancestors of the modern day Laos. Landlocked and surrounded by more powerful cultures, Laos remains the poorest country in southeast Asia in every way except for the renowned Lao sense of humour and fun.

Lao history in fact begins in the 14th century with a risqué event, the seduction of one of the king’s wives by his son Phi Fa, heir apparent to the throne. For his indiscretion, Phi Fa was banished. He and his son Fa Ngum journeyed south and took up residence in the Khmer royal court at Angkor. There, Fa Ngum studied under a Theravadin monk,gained favour of the Khmer king, and eventually married one of his daughters. In about 1350, the king of Angkor provided Fa Ngum with an army so that he could reassert control over his father’s lost inheritance.

By this time, Angkor was in a state of decline, and the political centre of gravity in Thailand had shifted southward from Sukkhothai to Ayutthaya. Angkor’s weakness and this shift in power in Thailand left the way open for Fa Ngum to establish an independent kingdom, with ties to Angkor, along the upper reaches of the Mekong river. Fa Ngum’s coronation at Luang Phrabang in 1353 marked the beginning of the historical Laos state. It also established the farthest northern extent of Khmer civilization, since Fa Ngum’s kingdom was modeled on Angkoran precedents even though the Laos are racially related to the Thais. Furthermore, Fa Ngum invited his Buddhist teacher at the Khmer court to act as his advisor and chief priest. Under his influence the new kingdom of Laos became firmly Theravadin, as it has remained to the present day. This Buddhist master brought with him from Angkor a Buddha image known as the “Phra Bang”. This image accounts for the capital’s name and like the tooth relic of the Buddha in Sri Lanka, became the palladium of the kingdom.

From the very beginning, Laos seems to have been just barely strong enough to maintain a separate identity in the midst of its more powerful neighbours. This it was able to do only by means of a series of alliances, concessions and submissions to the Thais, Burmese and finally the Vietnamese. As the Khmers too were finding out about this time, it was a question of being dominated by the related, Indianized cultures of Burma and Thailand or by the Vietnamese, who were especially hated because of their sacking of the Lao capital in 1479. Subservient alliances with Burma and Thailand were undesirable for Laos, but they had the effect of reinforcing Theravada Buddhism, which became the country’s primary symbol of continuity and identity in the face of its shifting political fortunes.

Because of the relatively weak central government of Laos, Theravada Buddhism became the primary cement holding together the numerous ethnic groups and inaccessible villages scattered through the mountainous countryside. According to the Lao model of kingship , the king sat upon the throne not so much because of divine right as because of his obviously good karma in his previous lives. He was expected to continue that good karma in this life by supporting the Sangha and promoting Buddhism through royal construction projects. Pursuing this role, King Visun (r. 1501-20) is remembered as the prime mover behind the splendour of Luang Phrabang, the first capital of Laos. Actually, Visun brought to fruition an ambitious Buddhist construction program which had been begun by his two older brothers in order to repair damage done by the Vietnamese in the previous century. Since they were made of wood, few examples of these early architectural works survive, but Luang Phrabang remains the site of some of the most attractive Buddhist monuments and ruins in southeast Asia.

Visun’s grandson Setthathirat (r. 1548-71) occupied the throne in 1548. Soon, Burmese expansionism forced Setthathriat to form an alliance with the Thais in 1560. The resulting treaty entailed shifting the capital from Luang Phrabang to Vien Chan, a site closer to the Thai capital at Ayutthaya and more conducive to trade with and supervision by the Thais. Setthathriat did for Vien Chan what King Visun had done for Luang Phrabang, carrying out a large-scale Buddhist construction program.

Remnants of Sutthathriat’s works still stand, the most notable being the hundred-yard square That Luang or “Great Shrine”, a temple mountain built in the Khmer style. Setthathriat also built a second grand temple to house a precious jade Buddha known as the Phra Keo. This image was the second palladium of Laos until it was removed to Bangkok by a Thai invading force in 1778. It has remained in Bangkok ever since in the Wat Phra Keo as Thailand’s most sacred image. This same image is also the primary symbol of Lao resentment against Thailand.

In 1778, Thailand conquered the southern kingdom of Vien Chan, asserted control over the northern kingdom of Luang Phrabang, and removed both the Phra Bang and Phra Keo Buddha images to Thailand. In 1782, the Thais restored the Vietnamese dynasty as a puppet regime in Vien Chan and returned the Phra Bang Buddha image. Despite continuing Thai domination of the entirety of Laos, the country remained divided into a northern and southern kingdom until 1893, when the French blockaded Bangkok and forced Thailand to cede to France the upper reaches of the Mekong river. The French protectorate thus established over Laos had little to do with the distribution of the Lao people, many of whom still resided in Thai territory. The Thais, on the other hand, resented having been deprived of the most valuable portion of their Laotian holdings. Again, no one was happy with European map-making when Laos eventually became independent. 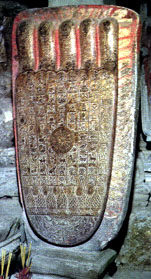 Briefly during World War II, Laos was nominally independent under Japanese control. After World War II, in 1946, reassertion of French control in southeast Asia led directly to the formation of a communist independence movement under Ho Chi Minh. The French collapse in southeast Asia in 1954 led to a coalition government in which both Lao royalists and Lao communists were represented. This coalition quickly collapsed, and Laos, like Vietnam, entered the 1960’s in the throes of a full-scale civil war between communist and pro-western factions, which were now aided primarily by the United States. After the defeat of American forces in Vietnam in 1975, the communists quickly gained control in Laos, at about the same time as Pol Pot’s Khumer Rouge gained control in Cambodia. In Laos, however, the transition to communism was not the nightmare that the Cambodians faced.

In the course of this much more benign transition to communism in Laos, there is little evidence of significant suppression of Buddhism. Even during the revolution, one of the main propaganda tactics of the Pathet Lao was to promulgate the compatibility of Buddhism and communism and to enlist the support of monks for their revolution. While many monks worked against the communists, it is clear also that many worked actively for them. When the communists came to power, they forbade the giving of alms to monks, but announced provision of a state-controlled ration of rice for monks. This ration was to be supplemented by food produced or earned by the monks themselves. Since then, monks have been required to perform productive roles in the community, primarily their traditional roles as teachers and healers.

What they teach and the medicine they practice, however, are controlled by a Department of Religious Affairs, administered by the Ministry of Education. The Department of Religious Affairs has overseen a program designed to expunge “counter-revoulutionary” and “exploitative” material from the traditional Buddhism of Laos. Under this program, in addition to teaching Buddhism, monks have a significant responsibility for teaching literacy and a patriotic, communist version of Lao history. Monks were traditionally consulted for the relief of illness, but prior to the communist takeover they administered primarily blessings and magical amulets. Now they administer traditional herbal medicine and where possible, western medicine.

The communist reformation of Buddhism, implemented by a panel of respected Lao monks, has been criticized as repressive by some Thai and expatriate Lao Buddhists. Alternatively, it has been praised by Lao and Thai reformists as representing a return to a purer Buddhism unencumbered by superstitious accretions. There can be little doubt, from the standpoint of Theravada doctrine, that traditional herbal and western medicine are an improvement over the previous practices of performing exorcisms and selling blessings and magical amulets. It is also evident that the previous catering to traditional Lao spirit cults and ancestor worship had nothing to do with scriptural Buddhism. 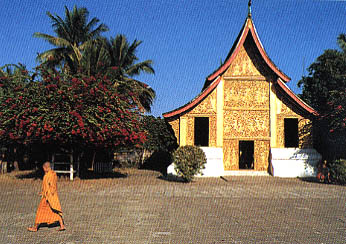 It is not yet clear how extensive revisions of the Buddhist texts themselves may be, or how such revisions will effect Buddhism in Laos. On the surface, there does not appear to be much material in the Theravada texts that conflicts with the moderate communism of the Lao regime. Some of the restrictions upon monks set forth in the Vinaya Pitaka have been abandoned – most notably the prohibition upon working the soil – but Vinaya rules are not strictly observed by all monks in any Buddhist country in the world. On the whole, most reports from Laos indicate that Buddhism there thrives in harmony with the communist regime. Clearly, there is much scope for a revival of the crippled Buddhism of Cambodia with recourse to the closely related and still healthy Buddhism of Laos. Laos and Cambodia have diplomatic relations going back to the 14th century, both espouse Theravada Buddhism, and both have lived under communist regimes.”

Extract from “Buddhism: A History” by Noble Ross Reat.