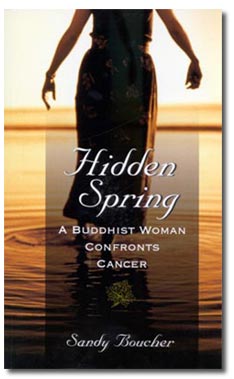 “It is the nature of all things that take form to dissolve again.” — the Buddha

In October 1995 I went to a hospital in Oakland, where I live, for the medical test known as a sigmoidoscopy. Although I had been experiencing symptoms, I did not for a moment anticipate that there could be a serious problem. I expected to be told that I had some minor, easily corrected condition. But the test, instead, opened the door into the world of hospitals, surgery and chemotherapy. The sigmoidoscopy showed a large tumor in my colon; a later colonoscopy confirmed it to be malignant. In a week I was having major surgery, and a month later began a course of chemotherapy that was supposed to last forty-eight weeks. My work, my intimate relationship, my home, my relations with friends, my body — every element of my life seemed sucked up into a dizzying vortex.

The one still point in this turning world was the Buddhist practice I had been cultivating for twenty years. The formal meditation practice served me: all those hours of sitting still while emotions raged in me, while my body clamored for relief, while my mind tortured me in myriad ways. I had learned to be there for it all — to attend to my sensations, recognizing in that moment, as painful or imperfect or frustrating as it was, that this was the actual texture and content of my life. And then to experience its changing — because I noticed that nothing ever stayed the same — and to know these thoughts, emotions and sensations as the incessant flow of phenomena. This practice had steadied me through major crises in my life, providing a reliable base point to which to return, no matter what else was going on. During those years I had been cultivating, as well, an attitude of spaciousness, acceptance, compassion for others and myself. This training and its attendant cast of mind served me in the most trying times of my encounter with cancer, and sometimes deserted me. My years of work with a unique and powerful teacher gave me some tools to meet the requirements of the illness and its treatment, when I could, and the compassion to be patient with myself and begin again, when I couldn’t. I have tried to reveal how I applied the practice and benefited from the Buddhist perspective in many of the most difficult situations, hoping that my experience may be of use to the next person who opens that door.

My entry into the rich sustaining tradition of Buddhism began in 1980 when I began to sit on a pillow and meditate. For the first three years I thought I would just learn how to do the meditation, and have nothing to do with the “furniture” of the religion out of which it comes. Even so, because I am a curious person and like to orient myself in a new activity, I began to study the texts of Buddhism, listen to what teachers said, learn about the Asian roots of Buddhism; as I understood more, I turned to Buddhist principles to shed light on my experience. In a difficult situation, I would hark back to my reading or the insights I had gained in meditation, and ask myself what would be the action that would best promote the welfare of all concerned.

Over the twenty years’ time since I first sat down on a pillow and tried to pay attention, I have been doing meditation with more or less faithfulness, both by myself and with groups and with my principal teacher Ruth Denison in her center in the Mojave Desert of California. Ruth is one of the first-generation Western women who brought Buddhist practice to us in the United States. She had studied and meditated in Burma with a noted Theravada Buddhist teacher, who asked her to return here to teach. I myself went to Asia, where I lived for a short time as a Buddhist nun in Sri Lanka, and stayed in monasteries in Thailand and Burma. As part of my life as a writer and teacher, I regularly study the texts of Buddhism, and keep on meditating.

Most of all I have tried to apply the Buddhist principles in my daily life. That morning in the G.I. (Gastro-Intestinal) Laboratory at Summit Hospital gave me an opportunity. I remember the doctor, a tall African-American man, talking to me after the test was completed. “When the growth is that big, we’re ninety percent certain it’s cancer. I’m calling your doctor right now. We want you in the hospital for major surgery in a week.”

I am not a very spiritually adept person. Mostly I plod along, failing often, succeeding sometimes in my efforts at concentration and right action. But my years of practice and study had given me an understanding of life’s task. So that when I received the news of cancer, I understood, Oh, yes, what is required of me now is that I be fully present to each new experience as it comes and that I engage with it as completely as I can. I don’t mean that I said this to myself. Nothing so conscious as that. I mean that my whole being turned, and looked, and moved toward the experience …

Returning from the test, with the doctor’s voice echoing in my head, I walked up the back steps to my house. “Well, I’m fifty-nine years old,” I thought. ” I’ve published four books, I’ve experienced marriage and many intensely engaging love affairs, I’ve done honest political work, I’ve traveled, I’ve lived my life as fully as I could. If this is the end, that will be all right.”

Then I walked in the door, through the kitchen and into the living room where Crystal lay on the couch. She had been up most of the night working on a music project; I had seen her sleeping there when I left an hour or two earlier. Now she sat up and looked at me, her face creasing with concern. “What is it?” she asked. I walked across to the couch, knelt on the rug and burst into tears. Crystal put her arms around me, as I choked out the news. And then she too was crying, as both of us felt the sadness of the coming ordeal, the terror that my life might end.

Buddhist practice does not prevent anything, it does not shield us from anything. It softens and opens us to meet everything that comes to us.

• For information on this book contact: Eileen Judd: ejudd@nbnbooks.com