The Sangha Metta Project, which engages monks in HIV/AIDS prevention and care, is unique in that it was initiated by monks themselves in response to the need for Buddhist monks to have a more active role in HIV/AIDS prevention and care. Taking the Buddha’s teachings as their inspiration, monks concluded that a core aspect of HIV/AIDS was ignorance about the condition among both the sufferers and the general public. 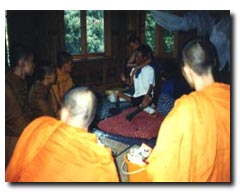 Monks give counseling during home visits to people living with HIV/AIDS.

In line with their traditional role as teachers, they decided they could teach both groups about its realities. Within this basic framework, the Sangha Metta Project teaches monks, nuns and novices about HIV/AIDS. It then equips them with modern participatory social management skills and tools so that they can in turn work effectively in their communities both to prevent further HIV transmission and to help people living with HIV/AIDS and their families. A crucial part of training is close contact between monks and sufferers, which includes monks having to accept and eat alms food prepared by people with HIV/AIDS. Sensitized in such basic ways they are soon able to work freely with affected people in quite remarkable ways.

Using the participatory approach, young novices show their understanding of HIV/AIDS and ways to manage the crisis.

One of the most important developments is that, in strong contrast with their formal roles, project-trained monks have become active in community work. Using Buddhist ethics as their guideline, they now teach villagers how to avoid high-risk behavior, help to set up support groups, train people with HIV/AIDS in handicrafts, donate their alms and take care of AIDS orphans. Because local people are accustomed to telling monks their troubles, the latter have become a conduit for identifying many secret HIV+ people who, once identified, can be referred to support groups and public assistance programs. “HIV-friendly” temples encourage these people to participate in community activities. They also provide training in meditation as well as grow and dispense herbal medicines in collaboration with local hospitals. This more active role among monks is strengthening trust between them and the people. It is also developing community potential and encouraging greater grass roots participation in solving problem at the local level. Because the project has given monks a way to become actively involved in their communities, something they have always wanted, it is spreading rapidly into other regions of Thailand, as well as neighboring countries such as Laos, Myanmar, Cambodia, Southern China, Vietnam and even Mongolia and Bhutan. 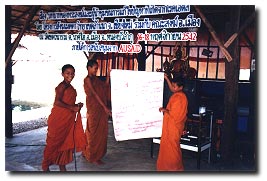 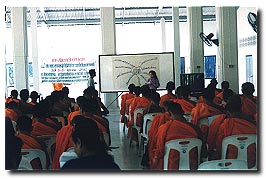 At group seminars and workshops, monks are given correct and up-to-date information on HIV/AIDS.

The Sangha Metta Project has the following objectives:

Monks give meditation instruction to people living with HIV/AIDS.

The Sangha Metta Project conducts and supports the following activities: 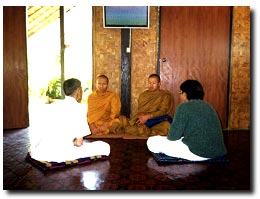 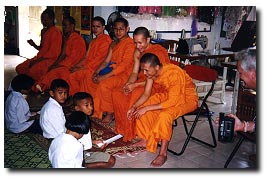 Monks give scholarships to children orphaned or affected by HIV/AIDS.

For Information and Donations: