Friday evening. At a time when most school and college children are settling in for a night of television or videos, or are getting ready to head off with their friends to their favorite fast food shop, cinema or discotheque, another group is settling into the quiet, solitude of a forest monastery somewhere in the northeast of Thailand.

Dressed in the white garb of devout practitioners, they have accepted the eight higher precepts of lay Buddhists and, under the guidance of a team of monks, are being given instruction on the techniques and practice of Buddhist meditation. 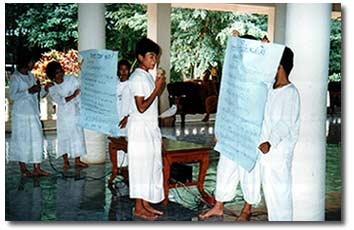 The meditation is aimed at calming the restless minds of these young adolescents so that they can receive the utmost benefit of the HIV/Aids-Narcotics awareness-raising programme that they are about to participate in.

Before the children retire for the night, they are invited to watch a video on HIV/AIDS.

This is the first night of a 3-day programme that a team of monks from temples in Udon Thani, Maha Sarakham and Sakon Nakhon provinces has designed to raise children’s awareness of HIV/AIDS and narcotics. The programme is run on a regular basis in collaboration with schools in northeastern Thailand.

On returning to their home temples after graduation, they saw that the HIV/Aids crisis and the spread of illegal narcotics were having an impact on the northeastern provinces of Thailand and that the young people there were in danger if being infected or becoming victims.

Unable to sit back quietly and let fate take its toll, they agreed that they should put their knowledge and training to use for the benefit of these young people and for the communities that support them as monks.

They realized that if children were to get infected or fall prey to drugs, it was partly because they lacked the skills to protect themselves and partly due to a decline in moral standards and traditional values.

With this in mind, they designed their programme to combine Life Skills Development with instruction in Buddhist ethics and traditional values.

Saturday morning. The early morning silence is broken by the sound of a temple bell calling the monks and children to meditation and chanting. A group of teachers and housewives take up duty in the temple kitchen to prepare a light breakfast for all.

Once the early morning duties have been completed, the children move to the community hall where they prepare for the day’s activities.

Upon arrival, they see that they have been joined group of attractive, young women. These women are roughly the same age as the senior students, maybe a little bit older, but instead of being dressed in white, they are dressed in ordinary street clothes.

It is soon revealed that all these women are HIV+ and will be spending the next two days with them. The reaction from the students is mixed. Some huddle closer to their friends. Some whisper to others. Some remain indifferent. The HIV+ women respond with friendly smiles.

The monks have invited an official from the local health office to talk to the children on HIV/Aids transmission, prevention and care. The children are encouraged to answer questions to clarify any misunderstandings they may have.

After the talk, the monks introduce an activity aimed at developing the children’s skills in preventing themselves from falling into high-risk situations.

They are given different situations to evaluate and, after being broken into groups, are assigned to put themselves in one of those situations. The groups are then broken into two sub-groups and while one group devises ways to lure the other into the situation, the other group has to develop the skills to prevent themselves from falling victim of the first group.

It could be a situation related to sexual activity, high-risk behavior, narcotics or alcohol abuse, prejudice or discrimination. It could be something that will have an effect on their future life.

Through this exercise, the children learn how to evaluate situations, and develop certain skills such as decision making, effective communication, showing empathy, critical thinking, planning, etc.

The exercises continue through the afternoon, but are slightly different in that the HIV+ participants are invited to become group members. This gives the children the opportunity to talk intimately with the women about their situation, their feelings and their problems. At the same time it breaks down any preconceived ideas the children may have had about PHA and helps to destroy discrimination. It also helps to build trust.

After completing the exercises, the children give presentations that are followed by summaries given by the monks.

At this point, the monks introduce various Buddhist teachings aimed at developing a stronger code of ethics among the children participating.

The day closes with more discussion and a video on HIV/Aids. By this time, the children’s awareness has been raised and they are more eager to participate, to share their feelings, their views and opinions. Before retiring, they sit in quiet meditation so they can contemplate the day’s events and the Buddhist teachings they have received.

Sunday. The mood, along with the theme, has changed. The children, calmed by their meditation and motivated by the previous day’s activities, listen attentively to a talk given by a local official on the dangers of narcotics abuse.

The talk is followed by the video “Goldtooth”, which introduces a new set of Life Skills Development activities. As with the previous day, all activities are performed in groups and are accompanied by relevant Buddhist teachings.

During the afternoon, the children are invited to openly express their feelings on the workshop. The feedback is encouraging. In contrast with other awareness raising programmes that some have attended, it’s felt that this has been more effective because of the role-plays and active participation. Previously the children have had to just sit and listen.

The informal approach has also helped to relax barriers between the children and the monks, and now some of the children come to the monks to discuss personal problems concerning peer pressure and drug abuse. Several young girls have found supportive allies in the HIV+ women and confide in them about their sex related problems.

Before the programme ends on Sunday evening, the children are once again asked to complete questionnaires.

Results show that the children now have a better understanding of HIV/Aids prevention, transmission and care. Whereas the average pre-test score was 60-65 percent, post-test scores were mostly perfect or in the high 90s.

Later visits to schools show that the children have taken their knowledge and skills with them and have commenced HIV/Aids and narcotics related activities. In some schools, peer support groups have been established, with the support of the teachers, so that children can give advice and encouragement to friends who face peer pressure or who are in danger in engaging in high-risk behavior. In other schools, corners have been set aside in the library or student activity room where materials and information on HIV/Aids and narcotics is freely available. The children are reassured that they can turn to their friends or teachers to discuss any problems they may have.

The monks and temple have not been forgotten and it is not unusual now to see groups of students using their leisure hours to visit the temple and discuss their problems with the monks.

The knowledge and skills with which these children have been equipped will be of a great help in managing the HIV/Aids situation in Thailand. At the same time, the training in Buddhist ethics and traditional values will help the children develop into valuable resources capable of assisting with future national development.