Home » Buddhist Art and Architecture: The Hill of Sanchi 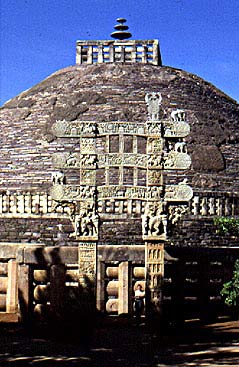 The Hill of Sanchi is situated about 9 kilometres south-west of Vidisha in Madhaya Pradesh, India. Crowning the hilltop of Sanchi nearly 91 metres in height, a group of Buddhist monuments commands a grand view even from a distance. It is unique not only in its having the most perfect and well-preserved stupas but also in its offering a wide and educative field for the study of the genesis, efflorescence and decay of Buddhist art and architecture for a period of about thirteen hundred years, from the third century B.C. to the twelfth century, A.D., almost covering the whole range of Indian Buddhism. This is rather surprising, for Sanchi was not hallowed by any incident in Buddha’s life; not is it known to have been the focus of any significant event in the history of Buddhist monachism. Hiuen Tsang, who so meticulously recorded the details connected with Buddhist monuments, is silent about it. The only possible reference to it is contained in the chronicles of Sri. Lanka, according to which Mahendra, son of Asoka and his queen Devi, daughter of a merchant of Vidisa, (modern Besnagar near Bhilsa or Vidisha) whom Asoka had married during his halt there on his way to Ujjayani as a viceroy, is said to have visited his mother at Vidisa, and the latter took him up to the beautiful monastery of Vedisagiri built by herself. Mahendra had stayed there for a month before he set out for Sri Lanka.

The foundation of the great religious establishment at Sanchi destined to have a glorious career as an important centre of Buddhism for many centuries to come, was probably laid by the great Maurya emperor Asoka (circa 273-236 B.C.), when he built a stupa and erected a monolithic pillar here. In addition to his marriage with a lady of Vidisa, the reason for his selection of this particular spot may be due to the fact that the hilltop served as an ideal place for giving a concrete shape to the newly aroused zeal for Buddhism in the emperor, who is said to have opened up seven out of the eight original stupas erected over the body relics of Buddha and to have distributed the relics among innumerable stupas built by himself all over his empire. By its quietude and seclusion ensuring a proper atmosphere for meditation, combined with its proximity to the rich and populous city of Vidisa, Sanchi fulfilled all the conditions required for an ideal Buddhist monastic life. The dedicatory inscriptions at Sanchi unmistakably show that the prosperity of the Buddhist establishment here was, to a great extent, due to the piety of the rich mercantile community of Vidisa. The nearness of the city, the strategic situation of which – at the confluence of two rivers, the Betwa and the Bes, as well as on two important trade routes resulted in a great overflow of wealth, was in no small measure responsible for the flourishing condition of Sanchi even when the empire of the Mauryas was a thing of the past.

After a temporary setback following the break-up of the Maurya empire, when the stupa of Asoka was damaged, the cause of the Buddhist establishment of Kakanaya was taken up with a feverish zeal by the monks and the laity alike, not a negligible percentage of the latter being formed by visitors of Vidisa for trade and other purposes. The religious fervour found its expression in vigorous building activity about the middle of the second century B.C., during which the Sungas were ruling and which saw the stone encasing and enlargement of the stupa of Asoka, the erection of balustrades round its ground, berm, stairway and harmika, the reconstruction of Temple 40 and the building of Stupas 2 and 3. The same intense religious aspiration and creative forces continued unabated in the next century as well, when, during the supremacy of the Satavahanas, new embellishments, in the form of elaborately-carved gateways, were added to Stapas 1 and 3. See below gateways pillar relief. 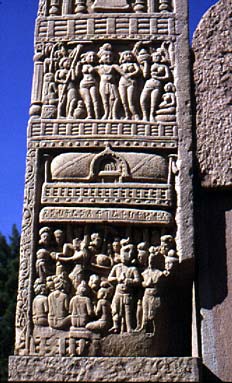 The political vicissitude which northern India went through immediately before and after the Christian era, when the Scytho-Parthians and Kushans invaded and annexed a large part of the land, had perhaps its repercussions at Sanchi as well, resulting in a slackening of structural activities. The establishment of a foreign power in the Malwa region under the Kshatrapas, engaged in chronic warfare, hardly provided any incentive for the dormant workshop. However, like the contemporary Buddhist centres of north and south-east India, Sanchi freed itself, during the period, from the earlier aniconic tradition, but its contribution to the evolution of the image of Buddha was nil, and it depended for such images on imports from Mathura.

After a prolonged period of stagnation and lassitude under the Kashtrapas, there was a revival of sculptural activity at Sanchi during the reign of the Guptas who, after conquering the Kshatrapas (circa A.D. 400), provided peace and prosperity essential for the growth of artistic pursuits. The discovery a few images in Mathura, sandstone executed in the early Gupta tradition, proves that Mathura continued, even in the fourth century A.D., to meet the demand of the clientele of Sanchi. But soon afterwards the local art of Sanchi once more came to the fore, and to this period belong the four images of Buddha seated under canopies against the berm of Stupa 1 facing the four entrances. But even in the best days of the Guptas the figures of Buddha from the ateliers of Sanchi fell short, in standard and number of their counterparts at such Buddhist centres as Sarnath.

The Gupta period, which ushered in a new epoch in the history of Indian temple-architecture, saw at Sanchi as well as resuscitation of structural activity. In Temple 17 which has withstood the ravages of time, we find one of the earliest Gupta temples noted for their well-balanced proportion, restraint in ornamentation and elegance.

After the glorious days of the Guptas centrifugal forces became once more rampant. And then came the shock of the Hana invasions, which resulted in the seizure of a large part of western and central India by that tribe. But that occupation was short lived, to be shattered by Yasodharman’s victory over their chief Mihirakula in the first half of the sixth century.

On the ashes of the Gupta empire rose a number of small kingdoms, none of which was powerful enough to bring any large part of India under its aegis, till Harshavardhana (A.D. 606-647) achieved some sort of political unity in northern India. His espousal of the cause of Buddhism brought a fresh lease of life to that religion. The vestiges of the seventh and eighth centuries, which saw at Sanchi the building of several monasteries and temples, reveal a prosperous condition of the Buddhist community at the place. The number of the images of Buddha made during the period was fairly considerable; executed in late Gupta tradition, they, however, lack the charm and grace of their prototypes and are almost lifeless and mechanical.

After the death of Harsha, northern India once, more became a prey to the ambitions of different dynasties. The Pratiharas, who had established themselves in the Malwa region by the eighth century, were followed by the Paramaras in the next century. But Sanchi seems to have been hardly affected by these political changes, as the existence of a number of medieval monasteries and temples testifies to a period of continued prosperity. Temple 45, for example, which is now a mere shell bereft of its original splendour, has the same architectural pompousness and exuberance of decoration as would characterise the contemporaneous north Indian architecture. From the find of such images like Vajrasattva and Marichi, it is abundantly clear that Vajrayana did extend its roots here as well.

It is not known how end came to the Buddhist establishment at Sanchi. No Buddhist monument can be assigned to the thirteenth century A.D. on the other hand, to this period belong a number of Brahmanical plaques containing representations of Vishnu, Ganega, Mahishasuramardini, etc. We do not know if the Buddhists deserted the place or gradually lost their vital forces to maintain their individuality thus succumbing to the all absorbing force of Brahmanism, which was one of the potent causes of the extinction of Buddhism in the land of its birth. 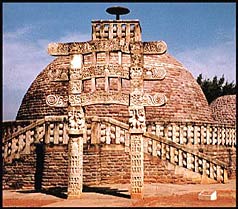 View of Stupa 3 with carved gateway 1st Century A.D.
The relics of Sariputra and Maha Moggalana, the two foremost disciples of the Buddha, were found by Colonel Cunningham in 1851 in this stupa, enshrined at the centre of at the centre of the dome on the level of the terrace.

From the fourteenth century onwards, Sanchi was left deserted and unnoticed, till in the year 1818 General Taylor brought it to public attention by discovering its ruins, of which he found Supas 1, 2 and 3 intact. The great interest which this discovery created accounts to a large extent for the immense damages suffered by the monuments at the hands of amateur archaeologists and treasure-hunters. In 1822, Captain Johnson, Assistant Political Agent in Bhopal, opened up Stupa 1

from top to bottom on one side, thus leaving a great breach which resulted in the collapse of the. West Gateway and a part of the enclosing balustrade. Stupa 2 was also partially destroyed. Alexander Cunningham, together with Captain F. C. Maisey, excavated Stupas 2 and 3 in 1851 and found relic caskets within. They also sank a shaft at the centre of Stupa 1, which, however, failed to yield any relies. These operations coupled with the depredations of villagers and the growth of vegetation, wrought havoc to the stupas. The pillar of Asoka was broken into pieces by a local zemindar to be utilized as a sugarcane press.

The question of repairs and preservation was not, at all considered till 1881, when Major Cole took up the work in right earnest and succeeded, in the course of the next three years, in clearing off vegetation, filling in the breach in the dome of Stupa 1, setting up its fallen West and South Gateways and a part of its railing and restoring the gateway in front of Stupa V. The other monuments, however, were left uncared for and no attempt was made to expose the structures lying buried under debris. This work was later on undertaken creditably by Sir John Marshall, Director General of Archaeology in India, who, between the years 1912 and 1919, brought the monuments to their present condition. His work entailed a large-scale clearance of jungle, excavation and thorough conservation of the edifices, which included the complete dismantling and rebuilding of the south-west quadrant of Stupa 1, setting up of its balustrades and erection of the crowning members, reconstruction of the dome, balustrade and crowning members of Stupa 3, resetting of the out-of-plumb pillars of Temple 18 repairs to the perilously decayed Temple 45, rebuilding of the retaining wall between the Main Terrace and Eastern Area, re-roofing and repairs of Temples 17, 31 and 32 and provision of an effective drainage. The site was next turfed and Planted with trees and flowering creepers. A small museum was also built to house the loose antiquities found in the course of these operations.