During the Buddha’s eighth week at Bodh Gaya as he sat in the shade of the Rajayatana tree he was approached by the merchants Tapussa and Bhallika. These two men were the leaders of a large caravan that was passing through Magadha. They offered him some food, listened as he explained the Dhamma and then took the two Refuges (there was no sangha at that time) thus becoming the first Buddhists. According to the Jatakas before Tapussa and Bhallika continued on their journey the Buddha gave them several hairs from his head. From a very early period Sri Lankans have believed that these relics were preserved in their country. The Pujavali relates the story of Tapussa and Bhallika’s encounter with the Buddha as told in the Vinaya and then adds; ‘They received those hair relics in a jeweled casket and took them to their own town and worshipped them. In the course of time they went on a sea voyage and came to the island of Lanka; and, going in search of firewood and water, they came to a place called Girikanda. They placed the casket with the relics on the summit of the hill, and when they returned after having cooked and eaten their meals they were unable to move the casket from where it was. 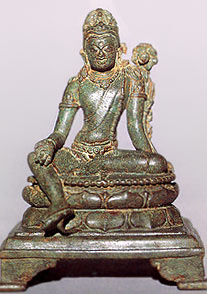 They then knew that this was a holy place and having honored it, covered the casket with stones, offered flowers to it and continued on their journey’. The Pujavali concludes by saying. ‘In later times there was a monastery called Girikandha at that place’. The stupa came to be known as the Akasacetiya (the Stupa in the Sky) a rather dramatic name considering that the hill is only 210 feet above sea level and the hill is now called Tiriyaya. In his Visuddhimagga, Buddhaghosa relates an incident which took place at Tiriyaya to illustrate the dramatic effects that religious joy can have on the human body.

There was a young woman living in the village of Vattakalaka near Girikandaka monastery. Her parents were about to go to the monastery in the evening in order to hear the Dhamma and worship the stupa and they told her, ‘My dear, you are expecting a child; you cannot go out at unsuitable times. We shall listen to the Dhamma and gain the merit for you’. And thus they set off. Although the young woman wanted to go with her parents she could not very well object to what they said. She walked out of the house onto the balcony and stood looking at the Akasacetiya illuminated by the moon. She saw the flickering lamps at the shrine and the monks and nuns, the lay men and women as they circumambulated it to the right after offering flowers and incense and she heard the sound of the chanting. Then she thought, ‘How fortunate they are to be able to go to the monastery and wander around such a shrine and listen to such sweet preaching!’.

Seeing the stupa as if it were a heap of brilliant pearls she was filled with such joy that she sprung into the air and came down on the stupa’s terrace where she sat chanting. When her parents arrived a few minutes later they were astonished. ‘What road did you come by’? they asked. She told them what had happened but they said, ‘My dear, those who have destroyed their defilement come through the air not people like you’. She insisted that what she said was true but her parents dismissed her words as the result of an overly vivid imagination. The Tamil people who live near Tiriyaya call the hill Kandasamimalai, Lord Skanda’s Hill, although there is no tradition of Skanda, the Hindu god of war, having visited or lived here.

The path up the hill passes between two large ponds and at its steeper parts there are steps. It winds its way through huge boulders several of which have caves under them until it arrives at the top of the hill. The oldest cave inscription is from the 2nd century BCE suggesting that the hill was sacred from the earliest period of Buddhism

The top of the whole hill is artificially leveled and surrounded by a wall with a gate on the east and another on the north. Apart from the stupa itself there are six shrines within this enclosed area, the largest of which held a recumbent Buddha image. Another shrine must have been sacred to Avalokitesvara as the bodhisattva is mentioned in one inscription as abiding on the hill. The stupa itself sits on a platform 79 feet in diameter and with entrances at the four cardinal directions. The moonstones at the entrances are plain and the dragon kings on the guard stones are unusual for their relative lack of jewelry. Around the stupa and facing each entrance are four stone altars, the eastern one being the best preserved. 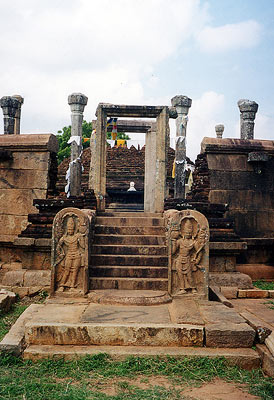 The entrance to the Akasa Stupa

These altars all once had Buddha images on them. Two rows of pillars held a huge dome over the stupa. Note that the inner circle of pillars is octagonal while the outer ones are square up to about four feet and then octagonal. Note also that the capitals are joined to the shafts of these pillars rather than being separate. Archaeological investigation has shown that the stupa was originally 25 feet in diameter but in about the 8th century when the domed roof was built it was enlarged to 32 feet. When archeologists got to Tiriyaya in 1951 vandals had already broken into the stupa and stolen the relic and its casket and they have never been recovered. There is a spectacular view from the top of the hill across the azure blue Bay of Bengal.

How To Get There
Tiriyaya is miles north of Trincomalli and is easily reached by road. At the time of writing the army was preventing visitors from going there but this situation will probably soon change.