Just before his final nirvana, the Buddha said that those with a deep understanding of his Dhamma (at that time that meant mainly monks and nuns) should not bother about either keeping or worshipping his ashes. Others, he said, may well wish to do so and he was by no means critical or dismissive of this. No doubt the Buddha understood that such worship may grow out of and at the same time reinforce faith, gratitude and joy. According to the Mahaparinibbana Sutta after the Buddha’s funeral a disagreement arouse about how ashes should be shared out and finally the brahmin Dona was asked to divide them into eight portions. He placed the ashes in a jar and divided them equally into eight portions and as a reward for his service was given the jar in which the ashes had been kept. However, there are several legends in which some other people managed to get some of the relics for themselves. For example, one story says that Dona smeared the inside of the jar holding the relics with honey and kept for himself the ashes that stuck to it. Another such story, recorded in the Dathuvamsa, says that a monk named Khema snatched the Buddha’s left upper canine tooth from the funeral pyre when no one was looking. It is this tooth that is believed to be enshrined in the Temple of the Tooth in Kandy.

The history of the tooth relic prior to its arrival in Sri Lanka in the ninth year of the reign of King Srimeghavanna is scant, fragmentary and full of fantastic details. It was passed from one person to another until it ended up in a city that later came to be named after it, Dantapura, Tooth City. This place is now identified with Dantavuram on the southern bank of the Vamsadhara River about 100 miles southwest of Puri in Orissa where there are extensive ruins in the area as well as Buddhist antiquities. For 800 years the Tooth was kept at Dantapura. Orissa and Sri Lanka had close political and cultural ties with each other and members of the Orissaian royal family were sometimes invited to become king of the island when a monarch died without an heir. 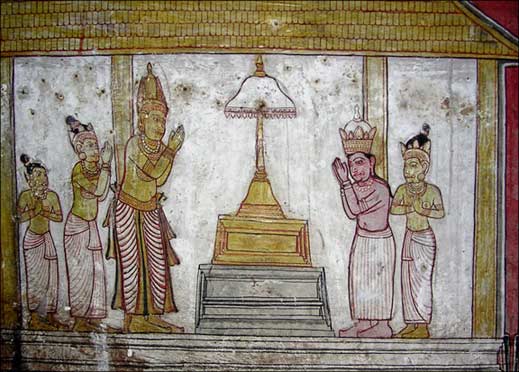 Painting of the Tooth Relic Casket being worshipped

In the 4th century King Guhasinha of Dantapura sent his daughter to Sri Lanka with the Tooth hidden in her hair to keep it safe during a time of political crisis. This was in the year 310 CE and since that time the vicissitudes of the Tooth have been meticulously recorded.

In 1560 the Portuguese who were constantly fighting with the Sinhalese for control of the island triumphantly announced that they had captured the Tooth. They took it to Goa where a huge public gathering was held during which Archbishop Don Gaspar, with spiteful glee, desecrated it, burned it then and had its ashes thrown into the sea. It was the Sinhalese however who had the last laugh. Just as some leaders will sometimes have doubles acting in their place to protect them from assassination, Sri Lankan kings sometimes had replicas of the Tooth made to confuse those who might want to seize it during times of uncertainty. The Portuguese had in fact captured one of these replicas. In 1545 the Tooth was brought to Kandy where it has remained ever since.

The Temple of the Tooth is approached through a large rectangular garden stretching from the center of the town right up to the Temple itself. As the pilgrim proceeded along the path he or she would have seen the white fortifications and red roofs of great Temple of the Tooth, Daladha Maligala. Of the original Temple and palace little remains – the octagonal tower, the moat, the fortifications and the main shrine housing the Tooth – nearly everything else is recent and of little architectural interest. At the entrance, which consists of a bridge over the moat, is a large Kandyan style moonstone and on either side of the stairs are two stones carvings of elephants with their drivers. All this is recent, the originals having been completely destroyed in the terrorist bomb attack of 1998. Crossing the bridge the pilgrim now comes to the massive gate house. Note the stone slabs with carvings of acrobats on the front of the gatehouse and the hinges on which the huge doors once moved. Turning right and ascending the stairs the pilgrim comes to the Temple’s main entrance. The elaborately carved stone doorframe has guardians on either side with their swords raised and a dragon arch above it. Through the door is a tunnel which leads to the long Drumming Hall with its 16 stone pillars. Every morning at 5.30 and evening at 6.30 drums and oboes are played here as special offerings are made to the Tooth. The Drumming Hall forms one side of the courtyard in which stands the shrine where the Tooth is kept. This shrine was probably built in the 17th century by Rajasinghe II on the very spot where the earlier one, destroyed by the Portuguese, had stood. It was extensively renovated by Narendrasinha in the 18th century and has been repainted and altered several times since.

The shrine consists of a two storied rectangular building on an oblong platform faced with stone. There are three entrances, the main one facing the Drumming Hall and one each on its north and south sides. A moonstone and stairs lead to the porch at the main entrance. On either side of the stairs are two stone lions, gifted by Chinese pilgrims in the late 19th century. The door frame and dragon arch above it are similar to those at the entrance to the tunnel only brightly painted. Four huge elephant tusks are sometimes kept on the porch. Now the pilgrim should turn left and walk around the shrine. Twenty six pillars with wooden capitals supporting triple corbels, all painted with lions, birds, fantastic beasts and flowers support the lower roof around the shrine. At the far end of the shrine is the entrance to a museum housing Buddha images and other gifts offered to the Temple over the years, none of them particularly interesting. Upstairs is the Sri Dalda Museum housing an excellent collection of documents, photos, and documents relating to the history of the tooth. Retrace your steps down to the shrine again, finish walking around it, returned to the Drumming Hall, turn left and climb the stairs that lead to the upper entrance to the shrine. It is here that devotees assemble every evening to worship the Tooth.

Facing the shrine is a large table always piled high with beautiful flower offerings and the air is usually thick with their perfume. If you wish to worship the Tooth close up it will be necessary to come here at about 5 p.m. on any evening and stand in line. When the doors open you will pass quickly through two small rooms to the third room where the Tooth is kept. It is not usually possible to notice much as the crowds are large and the attendants keep everyone moving. In a minute you will be standing before the large golden stupa which enshrines the Tooth and a minute later you will be out the side door. The Tooth itself is rarely displayed. On leaving the shrine turn right and take the stairs to the ground floor. At the bottom of the stairs is a door that leads outside.

How To Get There
Kandy is the second largest town in Sri Lanka and is easily reached from Colombo by regular buses and trains. The Temple of the Tooth is in the center of the town.