Ritigala mountain is 2,513 feet above sea level, three miles long and lies in a north-south direction. It is the highest mountain in northern Sri Lanka and in the rainy season its summit is often shrouded in mist and cloud. The modern name Ritigala is derived from the ancient name mentioned in the Mahavamsa, Arittha Pabbata, pabbata meaning a mountain and arittha meaning dreadful, or alternatively safety. It was from here, says the great Hindu epic, that Hanuman leapt back to India to tell Rama that his kidnapped wife Sita, had been found.

These are at least 70 caves at Ritigala which were prepared for monks between the 1st century BCE and the early centuries CE. An inscription in one of these caves mentions that King Lanjatissa the brother of Duttagamini gifted it and he probably founded the first monastery at Ritigala. The Culavamsa tells us that King Sena I built a monastery here for the Pansakulika monks and provided it with numerous slaves and servants. It is the ruins of this monastery that the modern pilgrim sees today. Sometime during the 8th century a group of monks broke away from the Abhayagiri and called themselves the Pansakulikas, that is ‘The Rag-robe Warers’. Wearing robes made out of rags, usually shrouds picked up from cemeteries, is one of the thirteen ascetic practices (dhutanga) allowed by the Buddha.

The fact that the Pansakulikas chose to name themselves after this particular practice suggests that they were reformers, probably protesting against what they a saw as the comfort and indolence of the city monks. However, the remains of their monasteries suggest that they were something more than just a ‘back to the forest movement’. All of their monasteries have certain mysterious features unique in Sri Lankan monastic architecture; long paved paths often with roundabouts in them, large stone-lined and stepped reservoirs and strangest of all so-called double platforms. These platforms are made out of huge slabs of beautifully cut stone and always occur in twos, joined by a bridge. They are usually built on natural rock foundations and are always aligned in the same direction. Near the platforms is often found a so-called urinal stone some of which are elaborately decorated. In fact, these ‘urinal stones’ are the only things in Pansakulika monasteries with any decorations on them at all. Further, no stupas, image houses, temples or images have ever been found at Pansakulika sites. 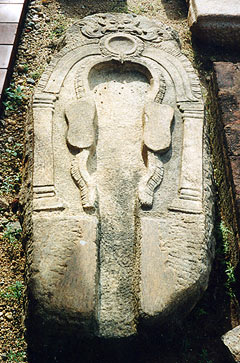 These mysterious features have so far defied all attempts to explain them. They were obviously related to some practices or rituals that the Pansakulikas did but what these were no one knows. For at least two centuries the Pansakulikas commanded enormous respect from both kings and commoners. But over the centuries they accumulated vast estates and their asceticism became more symbolic rather than real. In the 12th century they split into two rival sects and during the reign Vijayabahu I they left Polonnaruva in a huff when their wealth was confiscated as a part of the kings attempts to reform and unite the Sangha. After that they disappeared from history.

The ruins at Ritigala comprise nearly 50 double platforms and other buildings and cover an area of about 120 acres. It can be worthwhile just following any path one happens to find and see where it leads. But be careful, the jungle is very thick and it is easy to get lost. Also be careful of snakes particularly the adder which becomes very still when approached and thus is easy to tread on. To the left of the parking area at Ritigala a rough path leads through the jungle to several caves where some eight monks are living. This is a properly functioning meditation monastery so if you do decide to visit maintain an attitude of quiet respect.

Entering the ruins the pilgrim comes to a huge man-made reservoir created by building a bund across a valley down which two streams flow from the mountain. The circumference of the receiver is 1,200 feet and its inside is lined with stones meant to protect it and also to serve as steps for bathers. The top of the bund is also paved with large stones. Before being breached this reservoir would have held about 2 million gallons of water. Ritigala’s monks would have used this water for drinking and bathing but they probably also earned an income from it by channeling it to farmers. The path to the ruins runs along the southern bank of the reservoir, crosses a bridge, passes a circus and then leads to the first buildings. Turning right the pilgrim will come to the main refectory. This large rectangular building with a sunken and paved courtyard in its center with pillars around it. Note the several types of grindstones and the stone trough. As there were no villages nearby the monks could not go begging every day to get their food. Devotees probably donated raw rice which was cooked by the monastery staff and then offered to the monks. 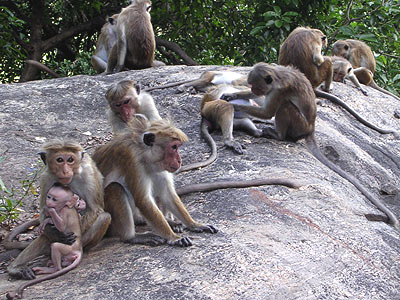 Just near the refectory is a large area enclosed by a wall which like most of the structures at Ritigala is made of huge finely cut and dressed slabs of stone. Within this area are two pairs of double platforms. Note how perfectly the stones fit together. These seem to have been the monastery’s main reception buildings. On the northern end of the enclosure wall is a path that leads down a ravine to a river where there is a stone bridge and a bathing place. Return to near the north west corner of the enclosed area and the pilgrim will see a path leading westward through very thick forest. This paved path runs for about a 1000 feet and has several flights of stairs to allow for the incline and more difficult to understand, two roundabouts. The first of these roundabouts, roughly halfway along the path, is the largest, while the second smaller one is towards the end of the path. A little before the first roundabouts a path leads off to the left to an impressive stone bridge, several double platforms and caves.

How to Get There
The turn off to Ritigala is on the main Anuradhapura-Polonnaruva road some 7 km from Ganawalpola and about 16 miles from Habarana between the 6 and 7 mile post. The ruins are about 3 miles from the turn off and the road is unpaved but in good condition. The ruins are situated roughly half way along the mountain on its eastern side.