In ancient times Kelaniya was both a kingdom and a city. As a kingdom it was sometimes independent from Anuradhapura or if not then only nominally under its control. Under the name Kalyani Pattanam the city was the ancient predecessor of Colombo, a major entriport and a meeting place for traders and merchants from all over south and southeast Asia. Their ships found shelter at the mouth of the Kelaniya River and the goods they brought made their way from Kelaniya to every part of the island.

According to the Mahavamsa the Buddha stopped at Kelaniya twice, during both his first and third visits to Sri Lanka. It was during his first stop that he mediated in a dispute between two yakkha chiefs and out of gratitude they gave him a beautiful gold and jewel-studded throne. During his second visit he is said to have bathed in the river at a spot near the temple which is still pointed out. Yatthalaya Tissa a nephew of Devananpiya Tissa is said to have built the stupa at Kelaniya and it is popularly believed to enshrine the Buddha’s throne. The development of Buddhism in Kelaniya seems to have taken place independent from what was happening in the rest of the island, perhaps Buddhism was brought here directly from India rather than spreading from Anuradhapura. At the time of Dutthagamani there was said to have been 500 monks in and around the city. King Voharikatissa placed a jeweled viyana on the stupa and Nissankamalla made a pilgrimage to Kelaniya. During the Cola period the stupa was badly damaged, probably by being broken into to get the treasure it was believed to hold.

In the 15th century Kotte, now an outer suburb of Colombo, became the capital of a kingdom of the same name and the kings of Kotte had their summer palace at Kelaniya. 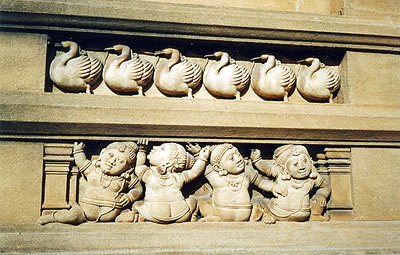 Stucco work on the Keliniya Temple

In 1550 King Bhuvanikabahu VII was murdered in this palace. His successor Don Juan Dharmapala was a Catholic and launched a campaign to destroy Buddhism and make Catholicism the dominant religion. He began by confiscating all the Kelaniya Temple’s estates and gave them to the Franciscans. Twenty years later the temple itself and much of the stupa were demolished as the campaign to destroy Buddhism intensified. With the expulsion of the Portuguese by the Dutch in 1656 the persecution of Buddhism eased but not by much. In 1682 the Dutch issued an edict forbidding people from worshipping even the ruins of the stupa. Seven years later the King of Kandy wrote to the Dutch governor asking permission to rebuild the temple and the stupa but his request was denied. The governor wrote, ‘In the contest between the Kingdom of Darkness and the Kingdom of Light the cause of God must prevail over the cause of the Devil’. With the coming of the British persecution ceased and gradually Kelaniya was rebuilt.

The Kelaniya stupa is about 90 feet high and has a diameter of 98 feet at the base. This is the most well known paddy heap shaped stupas in Sri Lanka. Very few modern Sri Lankan temples have any artistic or architectural interest but the Kelaniya Temple is certainly an exception to this. Around the outside of the temple are pavilion-like niches with various figures in them. Arriving back at the entrance the pilgrim should climb the stairs and go inside. Note that the balustrades on the stairs are formed by two lion-elephants (gajasinha) the medieval equivalent of the makhara balustrades of the Anuradhapura period. All the walls inside the temple are decorated with fine paintings dating from the late 18th to the early 19th centuries and are the finest modern religious paintings in Sri Lanka. To the left of the temple is a huge and very ancient Bodhi Tree and beyond this is the sima with its character four marker stones at its four corners. Just next to this is a building, and set into its walls are four inscriptions. The first and oldest of these is dated 1527 and records repairs to the temple and grants made to it by King Parakramabahu IX. This inscription was broken into seven pieces when the temple was demolished by the Portuguese. Another inscription dated 1767 mentions that a novice named Mapitigama made some repairs to the temple and set up several Buddha images. The other inscription dates from 1779. Nearby are two ancient broken Buddha images

How to Get There

Take bus No 235 from Colombo to the temple. Kelaniya is just 7 km from the center of Colombo.