In the early 20th century there were still numerous Buddhist remains in the Jaffna Peninsular but these now have nearly all disappeared due to neglect, pilfering or deliberate destruction due to political reasons. One place where extensive Buddhist ruins can still be seen is at Kantarodai a little to north of Jaffna. On the side of a grove of lovely palm trees is a collection of stupas and mounds, the remains of ancient buildings. There are now 20 complete stupas but judging by the numerous pinnacles in the Jaffna Museum which were picked up in the area there were once many more. The largest stupa is about 23 feet in diameter and the smallest about 6 feet. The base of each stupa is made of coral stone molded into four bands and the domes are made of coral rubble coated with plaster fashioned to look like blocks of stone. 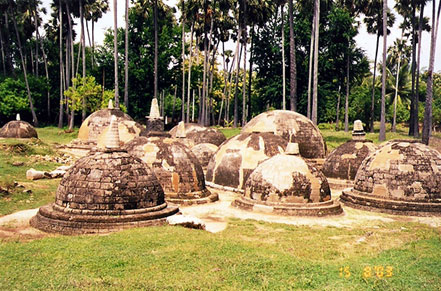 The hamakas and spires are made of stone, sometimes a single piece sometimes of two pieces with the pinnacle fitting into a hole in the hamika. Archeological investigations done at Kantarodai in 1966-7 found that the site was inhabited from about the 2nd century BCE to about the 13th century CE. When P.E. Pieris came here in 1917 he found several Buddha images. He also noted that locals were regularly removing stones from the site to use for building purposes. Kantarodai was probably a monastery for Tamil monks although some have argued against this. However, Buddhism was widespread in south India in ancient times and there is no reason to doubt that some Tamils living in Sri Lanka were Buddhists too. Certainly the stupas at Kantarodai are different from those found in other parts of Sri Lanka. Further archaeological investigation may settle the issue one way or the other. At Chunnakam there was the extensive ruins of a stupa and monastery and several large Buddha images but these have all disappeared now.

Getting There
Take the Chunnakam road which runs directly north from Jaffna and ask to be put off at the Kantarodai Upathiyayor Road turnoff which is about 2 km past Chunnakam. From there it is about a I km walk to the ruins. The total distance from Jaffna is about 10 km.