Perhaps the most beautiful Buddha images in Sri Lanka are the ones at Gal Vihara. Four images of different sizes are carved out of a cliff about 56 yards long and falls away gradually at each end. Nearly 15 ft. of rock has been cut away to form the three large images and the cave. The beauty of the images and their lovely natural setting have long attracted the admiration of visitors. The famous Catholic monk Thomas Merton fell into a state of exaltation when he came here. The modern name Gal Vihara means the Rock Temple while the name given in the Culavamsa is The Northern Temple (Uttara Vihara).

The sitting image is 15 ft. high and sits on a low pedestal in the front of which are niches containing lions and crossed vajras showing the lingering influence of Tantric Buddhism. Next to this is a cave with pillars carved into the cliff. In the middle of the cave is a high throne with a Buddha image on it flanked by two devas. 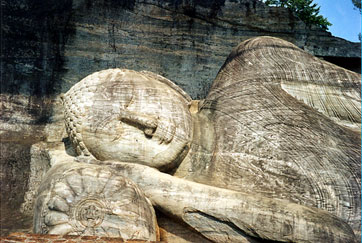 The Buddha in the lion posture (sihasana)

46 ft. long and depicts the Buddha in the lion posture (sihasana) just as he attained final Nirvana. He rests his head on an elaborately decorated cylindercal pillow. Walking to the far end of this image the pilgrim will notice that the soles of the Buddha’s feet are covered with auspicious marks. As is charastic of images of the polo period the Buddha has a round face with a high forehead. Despite its somewhat stylized form it has a peaceful that cannot fail to mov affect the all who see it.

Next to the cave is a standing Buddha with its arms crossed in front of it, one of the few Buddha images depicted like this Because of this unusual hand gesture some have speculated that this is not an image of the Buddha but of Ananda grieving for his master about to pass into final Nirvana. This image has a particularly benign and peaceful face. Right next to this is a reclining Buddha some 46 ft. long, a masterpiece of the sculptor’s art.

The Buddha in the lion posture (sihasana)

On the sloping rock between the cave and the standing image is one of the longest inscriptions from ancient Sri Lanka. The inscription details King Prahramabahu’s efforts to reform and unite the sangha in 1165. It quotes the king as saying; ‘Seeing again and again a blot on the immaculate Buddhist religion if a mighty monarch like myself were to remain indifferent the religion might perish and many living beings would be destined for hell. Let me serve the religion that it might last a thousand years’. It then proceeds to detail a new code of conduct for monks as drawn up by the famous ascetic monk Maha Kassapa of Dimbuagala. This code is interesting in that it gives a glimpse of the everyday life of Sri Lankan monks in the 12th century.

If a wayfarer fails to find one

Equal to or better than himself

There should be no fellowship with fools.

The wise man proceeds from one shrine to another, giving no thought to rivers, mountains, rain or the burning sun. He ignores any abuse he encounters and humbly accepts any alms he receives. He greets fellow-pilgrims, gladly shares his food with them and gives them advice on the road ahead. Thus he learns patience and contentment, generosity and kindness. Such a pilgrim is truly blessed by the Buddha. .

Think of yourself as a pilgrim and your teachers as guides.

Think of their instructions as the road

And the practice as the land of your destination;