Dighavapi was according to the Dipavamsa sanctified by the Buddha during his third visit to Sri Lanka and is one of the sixteen sacred places. The name Dighavapi literally means ‘long reservoir’ although it is probably a derivative of Dighayu, one of the ministers of King Panduvasdeva. Despite its significance Dighavapi seems to have never been as popular as some of the other sacred places and even today it is rarely visited. In the past it was a major city and King Saddhatissa, the son of Devananpiya Tissa, built the stupa there which was repaired and enlarged several times subsequently. According to the records a young monk was once repairing the plaster work on the stupa when he slipped and fell. Immediately he began to chant the Dhajagga Sutta and was miraculously saved as a result. There is little to see at Dighavapi today. In the 1920’s attempts were made to repair the stupa but funds ran out and today its dome is only half complete and unplastered. All around the stupa are flower altars and large stones from ancient buildings. 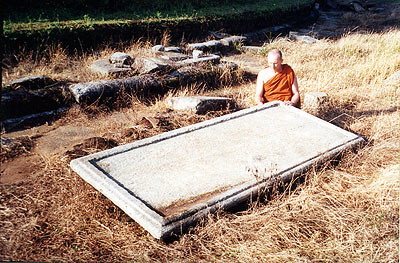 Ampara is the nearest main town to Dighavapi. From Ampara take the road to Irakkamam and then proceed for another 5 km, a total distance of about 17 km. Beyond Irakkamam the road is very poor and there are no buses. At the time of writing the area around Dighavapi was not secure.