Just a few kilometres south of the market town of Dambulla is a huge hummock 500 feet high and 1000 feet long rising above the countryside. This location has been inhabited by monks for at least 2000 years and was known in ancient times as Jambukola. From about the 1st century BCE monks lived in the huge cave under this hummock and the 70 other caves in the area. This monastery was known as Jambukola Vihara. By perhaps the 8th or 9th century enthusiasm for the ascetic cave dwelling lifestyle began to wane and the monks moved out of the caves into a monastery at the foot of the hill and the large cave was given over to ceremonial use. It was artificially enlarged and five temples were built in it. In the 12th century King Nissankamalla came on pilgrimage to Dambulla and ‘had the lying, sitting and standing Buddha images in the cave gilded, celebrated a great puja at the cost of seven hundred thousand gold pieces and renamed the cave the ‘Golden Rock Cave’. Most of the numerous paintings at Dambulla were done in the 18th and early 19th century while a few were done in the early 20th century. 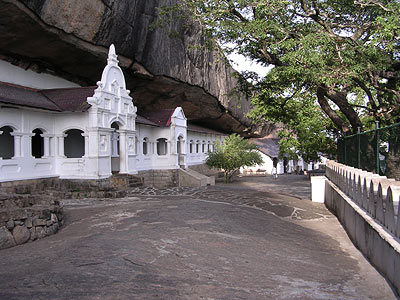 On passing through the entrance gate the first thing the pilgrim sees on the right is an inscription carved on the rock. The inscription was written after King Nissankamalla visited Dambulla during one of his numerous inspection tours. Nissankamalla describes the endowments he made to the monastery. The first cave is a little beyond the inscription. At the entrance is an interestingly designed stone used for washing the feet with a water trough beside it. Inside is a reclining image of the Buddha so large that it makes the cave rather cramped. The paintings on the walls are faded and blackened by smoke from oil lamps and incense.

The next cave, the Maharaja Lena, is the largest and most important temple at Dambulla. Enter the Maharaja Lena by the second of the two doors. The cave is 122 feet long, 75 feet wide and 21 feet high at its highest point. On the left as you enter is a fine statue which popular tradition says is of King Valagambahu but is more likely of a bodhisattva. Directly in front of you across the floor as you enter is the temple’s main image, a life-size Buddha standing under a dragon arch. Where the paint has peeled off one can see the gold leaf below. This is probably the gilding done by Nissankamalla in the 12 century. 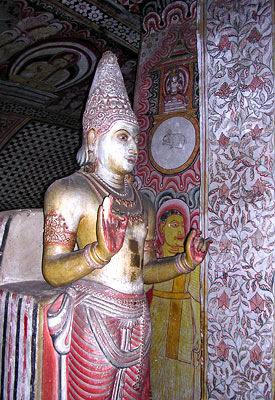 Now walk down the line of standing and sitting Buddha images. In the middle of the floor at the far end of the cave is a pot enclosed by a low wall which is kept perpetually full by drops of very pure water dripping from the roof. This water is believed to have healing powers and is eagerly sought by pilgrims. Turn the corner and walk past the five large Buddha images seated along the east wall. Turning the corner again the pilgrim will come to a large reclining Buddha. At this image’s feet and just next to the temples second door is a statue believed to be of King Nissankamalla. A little beyond this is a painted stupa with eight Buddha images sitting around it. The whole roof of the cave is covered with paintings.

The Mahaatula Lena, the second largest temple at Dambulla is 90 feet long, 80 feet wide and 36 feet high at the highest point. Directly in front of you as you enter is a large seated Buddha image flanked by two standing images. 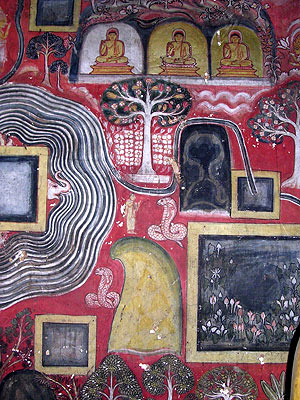 Taking up nearly the whole of the east side of the temple is a large reclining Buddha. Behind these three images is one of the most charming and unusual paintings: a depiction of the mythical Lake Anotatta in the Himalayas. The water that forms the four rivers flows out of it. The Vinaya says that the Buddha made a flying visit to this lake just after his enlightenment. According to the legend four of the sacred rivers of India flow out of this lake through lion, horse, elephant and bull spouts. Around this is a lotus pond, flowering trees, gods, dragons, lions, elephants and birds, a veritable wonderland. Along the bottom of this painting is a line of fruit trees and along the top a line of billowing clouds. 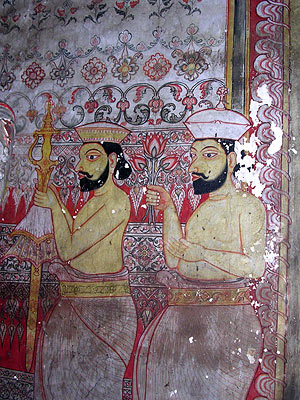 A little further along from this is a stature of Kirti Sri Raja the last king of Kandy who did some repairs to the temple. The monarch is depicted bearded and wearing his crown and pants embroider with flowers. Golden chains around his neck and waist hold a jeweled brooch to his chest. The paintings on the wall behind this statue depict courtiers holding trays of blossoms and lotuses. Note the floral patterns also.

Dambulla is 72 km north of Kandy and 64 km south east of Anuradhapura on the main road between the two towns. From the road it is a good 150 meters walk up the rock slope and stairs to the temple. By midday the rock gives off a tremendous heat and having an umbrella can make quite a difference.