This place is about 4 miles southeast of Welawaya. Buduruvagala is does not seen to be mentioned in any ancient records and even its original name is not known. The modern name of the place means the Rock of Buddhist Sculptures. Nothing is known about the history of Buduruvagala or why someone would choose to make such huge images in such a remote place. Perhaps it was a hermitage for meditating monks who were content to live in the forest doing their own practice without attracting the attention of the outside world. On the eastern side of an impressive cliff some 300 feet long and 70 feet high are a series of impressive Buddhist statues. The central image in this group standing Buddha image 43 feet high with his right hand in the gesture of fearlessness. For some reason the sculptor was reluctant to cut deep into the rock. In parts the workmanship is rather crude and much of the body seems to have never been unfinished. For some reason the sculptor was reluctant to cut deep into the rock and even if he had finished his work the image would have been rather flat. At the Buddha’s feet is a lotus throne which has been added later. 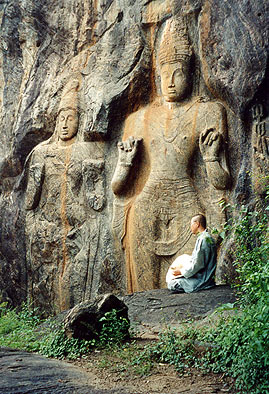 The bodhisattvas to the right of the Buddha image

To the right of the Buddha is Avalokitesvara with Bhrkuti, sometimes also called Pandaravasina, on his left and her sister Tara on his right. Avalokitesvara is 24 feet high and crowned but otherwise unadorned and has his hands in the gesture of argumentation. His eyes, nose and mouth are too small for his face giving it a rather unusual look. Remarkably, the original plaster and even a few fragments of paint still cover this image. The bare breasts and gracefully curving hips emphasize this deity’s feminine beauty and tenderness. On the right is Tara who represents Avalokitesvara’s compassion. However this image is so incomplete that there is little worth commenting on. Bhrkuti represents Avalokitesvara’s wisdom. Tara represents Avalokitesvara’s compassion. Marks to the left and the right of the images show that it was once enclosed. To the left of the Buddha are three more images, Maitreya in the middle flanked by Vajrapani on the left and an unidentified bodhisattva on the right. The arrangement of these bodhisattvas around the Buddha is similar to that described in the elaborate mandala mentioned in the Manjusrimulakalpa and suggests that Buduruvagala was a center for the practice of this Tantra.

Buduruvagala is 5 miles from Welawaya. From the turnoff it is a walk of about 4 kilometres through very pleasant countryside. The road is unmade all the way but easily passable for ordinary vehicles. There is a small monastery a little before the images.