The approach road to Avukana passes along the bund of the Kaluvava one of the biggest in Sri Lanka which was built by King Dhatusens in about 470. This bund is nearly four miles long, 40 feet high and holds back 72,687 acre feet of water. The Kalavava was able to irrigate about 7,000 acres of rice fields. A short distance on the left from where the road turns off the bund are the remains of the huge sluice and spillway of this hydraulic marvel. Continuing further on the pilgrim will arrive in Avukana. The various caves around Avukana have inscriptions dating from the 1st century BCE to the 2nd century CE which shows that the place was a monastery from at least that time. Avukana’s ancient name is unknown and so is the king who made its fine statue. In the 18th century the place was called Kalagal which in Pali would be Kalasela. A place called Kalasela the mentioned in the Culavamsa as containing an image for which King Dhatusena (455-73) had a diadem made. As Aukuana’s statue dates from around the 5th century BCE it may well be the place mentioned in the chronicle.

The great Buddha of Avukana is carved out of a cliff and is nearly free standing, being attached to the cliff by only the narrowest piece of rock. It is 38 feet 10 inches high and its details are as sharp and clear as if they were only carved yesterday. Considering the images great size the sculptor did his work with considerable finesse and produced an image of grace and lightness. The lotus on which the image stands is a later edition dating from about the 8th century. When it was examined by archaeologists a very interesting discovery was made. In a cavity some 6 feet below the images’ feet were five bronze statues: one of Brahma with Indra, Kuvera, Yama and Varuna arranged around it. These statues had been placed there in about the 9th century. 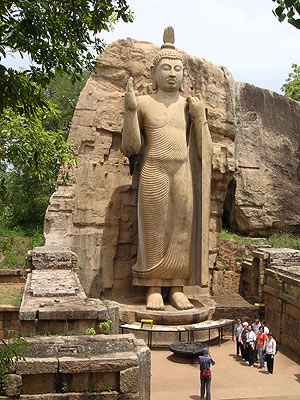 The huge stones around the statue indicate that the temple that originally housed the statue must have been very impressive indeed. These remains were built at a later period from the statue itself.

How to Get There
A bus directly to Avukana leaves from Dambulla bus station every morning. Several buses a day go from Kekirawa which is on the main Kandy-Anuradhapura road.