Home » Why I became a Buddhist Nun, by Ani Thubten Chodron

Why I became a Buddhist Nun, by Ani Thubten Chodron 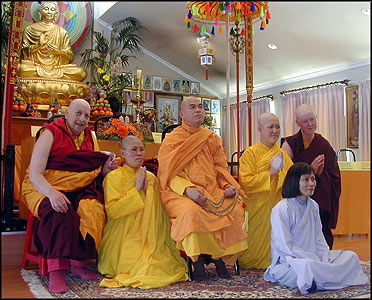 “In one of Shakyamuni Buddha’s past lives, he was a young prince Mahasauva, walking in the forest. He came across a hungry tigress who was about to eat her cubs. A great feeling of compassion arose in the young prince, and he gave his body to the tigress to save the cubs and her from dying. The prince gave selflessly to protect and save others; he had pure Bodhicitta (altruism). Upon hearing this story I was filled with compassion and devotion. This was the first story I heard of the Buddha’s life.

When I took ordination earlier this year with His Eminence Chogye Trichen Rinpoche in Nepal, he bestowed the Bodhisattva vows upon me first. This left me with a huge impression of the importance of Bodhicitta. Becoming a nun was not a difficult decision for me (almost anyone can be ordained) but developing true Bodhicitta takes lifetimes.

When I went to Nepal some three years before as a volunteer teacher in a refugee camp I wanted to be of some benefit to others. For every person I thought I might help, another appeared; it was endless. I questioned this dilemma, and although my intention was sound, I feel that without compassion and wisdom combined it is easy to cause more harm than good and not be of true benefit. The Buddha said we need to look at our own suffering to understand it, otherwise it is like putting a band-aid on a sore: it may cover the sore for a while but eventually the band-aid will fall off and the sore will still be there.

Although we have this precious human rebirth, it is only precious if we use it in a beneficial way. To make the most of these opportunities, we have to listen to the teachings and practice. Being ordained gives me the time to practice, study and live in a community with other practitioners. It is through the kindness of the teacher and all the great masters that we are able to listen to these precious teachings and practice them. Although the path is long, it is on the path that we learn that the teachings are everywhere, in everything and at all times. Bodhicitta is the most important thing.

By this merit may the Sangha (Buddhist community) grow and the Buddha’s teachings shine forth to awaken the Buddha-nature within.”

I was born in Poland and brought up in the Catholic tradition. When I was nine I attended my first Communion. I have two memories of this time: one, that I was unhappy to have a short dress as my mother could not afford a long one and, two, a desire or a decision to become a nun. Although my feeling was strong it dissipated with time. However, my faith was firm and I remember the day when, despite the communist regime’s pressure, to go to a first of May celebration, I went to Sunday mass.

Then came the days of questioning the meaning of life, reviewing various values, days of rebellion – the whole adolescent quest. I was a growing atheist seduced by science, ‘modem’ thinking, and then psychology and philosophy which was only feeding my arrogance. For many years I felt superior that I did not need faith like those other “weak” people who needed a crutch to cope with the hardships of life.

I came to Australia at the age of 35 and for the next seven years my spirituality remained dormant. When I was 42, due to various samsaric predicaments, I found myself alone in Australia with the choice of going to live in Switzerland. I went to meet my family and friends in Europe and was nurtured by their love. It was also the year when a Pole became the new Pope. I stood only a meter from him when he was blessing people in San Peter Plaza and I suddenly felt a profound peace. I went to a Polish mass and my cultural and spiritual sentiments were painfully awakened.

On returning to Australia I became very depressed experiencing loneliness and an enormous sense of loss, but I made the decision to stay.

At that stage (probably out of despair) I began my quest for God. I read some Christian, Hindu and new age books. I was fond of Carlos Castaneda’s writings, which were a very good preparatory ground for my later Buddhist path. He definitely shook my scepticism and my pride.

Then, unexpectedly I met Wendy Finster, a Buddhist nun. She joined our team at a mental health clinic where I was working. She ran meditation classes and gave us many teachings. I was very impressed with her as a person and with the Buddhist philosophy. Soon after I went to the teachings of Lama Yeshe and his presence made a deep impact on me, similar to my experience with the Pope. I felt that I had found my spiritual niche in Buddhism. But it just happened that I talked to a man who had adhered to various faiths during his life and he advised me to get some clarity on my relationship with Catholicism before I entered the Buddhist path.

I took his advice and entered the long and complicated course of re-establishing myself in the Catholic church. I had a big obstacle because I was not able to receive communion as a divorcee. And communion for me was the very essence of practicing my faith. Despite my attraction to Buddhism I had a strong emotional connection with the spirituality of my childhood. I felt very alone, and knew I had to resolve my predicament myself.

So I directed all my faith and effort to divine powers by fervently praying to Jesus and Mother Mary and now I think it was a good devotional training. It was also helpful to listen to some teachings of a local priest. I used to discuss them with my then husband Ivan who had been attending Tara Institute. Gradually I was finding my place in both worlds. The time of making a final step was coming and was concluded after the trip to Asia which directed me to Geshe Doga’s classes at Tara Institute.

I took refuge in I993, and since then things started unfolding with ease. I994 – Lam rim retreat with Lama Zopa and Geshe Tashi Tsering, where I took Pratimoksha vows, which had a big impact on me. I996 Kalachakra with His Holiness Dalai Lama, when I first saw Lama Choedak (who was on a panel). I felt a strong connection and a wish for him to be my teacher; I997 – teachings of His Holiness Sakya Trizin. That year I asked Lama Choedak to be my teacher? worrying that he may not accept me as I came mainly from Gelug tradition. However, he did!

So I was attending Lama Choedak’s teachings and initiations and felt spiritually alive and guided on the true path. My then husband Ivan (now Thupten Lekshe) became Lama Choedak’s student too. His past desire to become a monk was awakened and we were discussing how to realize it. I didn’t want to become a nun but was happy to support his decision. We always functioned well as a team and his ordination was something for both of us (and for other beings of course). We both felt good that I could be his link with the “normal” world.

Thupten Lekshe was ordained in 2000 and at the same time I took celibacy vows. Our new relationship was very satisfying, it felt like a natural progress from marriage to a more spiritual relationship which often took the form of challenging and mutually confronting our defiled behaviours. Our informal vow was a commitment to ‘not letting each other get away with it’. After a while my conviction about not being ordained weakened. I realized that it was possible to live in the West, to work, and however difficult, to bring two worlds together. And I began reconsidering my position re ordination, firstly just as a possibility. And then the desire was growing.

I suddenly remembered my wish to become a nun when I was 9 years old. Then I talked to Lama Choedak who said it was OK for me. Thupten Lekshe and my daughter were both very supportive. I was a bit unwell at that time and scared about travelling to Nepal to receive ordination. Then my daughter said: ‘if the worst happened you would just die and it would be auspicious’. I saw her point and relaxed. Now I was truly determined, nothing was going to stop me.

And then I found out that His Eminence Chogye Trichen was coming to Australia. So in June 200I I was ordained by His Eminence as a novice Buddhist nun. The ceremony took place in Canberra at Black Friars, a Priory of Dominican priests and it was symbolic for me that two faiths I adhered to in my life had come together.

My humble gratitude goes out to Lama Choedak Rinpoche and to all my other teachers whose kindness guides and holds me on the path. May they have long lives and be with us until all are enlightened.”