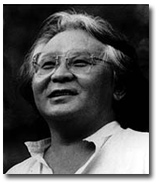 Rigpa is a Tibetan word which in general means ‘intelligence’ or ‘awareness’. In Dzogchen, however, the highest teachings in the Buddhist tradition of Tibet, rigpa has a deeper connotation, ‘the innermost nature of the mind’.

The whole of the teaching of Buddha is directed towards realizing this, our ultimate nature, the state of omniscience or enlightenment–a truth so universal, so primordial that it goes beyond all limits, and beyond even religion itself.

Inspired by this, Sogyal Rinpoche gave the name ‘Rigpa’ to his work and to the vehicle he was developing to serve the Buddha’s teaching in the west. Now an international network with centres and groups in eleven countries around the world, Rigpa seeks:

To make the teachings of Buddha available to benefit as many people as possible, and to offer those following the Buddhist teachings a complete path of study and practice, along with the environment they need to explore the teachings to their fullest.

Lineage: An incarnation of Lerab Lingpa Terton Sogyal, a teacher to the thirteenth Dalai Lama, by Jamyang Khyentse Chokyi Lodro, one of the most outstanding masters of the twentieth century. Jamyang Khyentse supervised Rinpoche’s training and raised him like his own son. Rinpoche went on to study with many other masters, of all schools, especially Kyabje Dudjom Rinpoche and Kyabje Dilgo Khyentse Rinpoche.

Biography: Born in Kham in Eastern Tibet, Sogyal Rinpoche was recognized as the incarnation of Lerab Lingpa Tertön Sogyal, a teacher to the thirteenth Dalai Lama, by Jamyang Khyentse Chökyi Lodrö, one of the most outstanding masters of the twentieth century. Jamyang Khyentse supervised Rinpoche’s training and raised him like his own son.

In 1971, Rinpoche went to England where he studied Comparative Religion at Cambridge University. He went on to study with many other masters, of all schools of Tibetan Buddhism, especially Kyabjé Dudjom Rinpoche and Kyabjé Dilgo Khyentse Rinpoche, serving as their translator and aide. With his remarkable gift for presenting the essence of Tibetan Buddhism in a way that is both authentic and profoundly relevant to the modern mind, Sogyal Rinpoche is one of the most renowned teachers of our time.

Rinpoche has been teaching for over 25 years and continues to travel widely in Europe, America, Australia, and Asia, where he addresses thousands of people on his teaching tours and is a frequent speaker at major conferences. In 1993, Rinpoche founded the Spiritual Care Program which, under his guidance, aims to bring the wisdom and compassion of these teachings to professional and trained volunteer caregivers who work in end of life care.

Particular teachings: Spiritual Care Program, the aim of which is to demonstrate practical ways in which the compassion and wisdom of the Buddhist teachings can help those facing illness or death, their families, and medical caregivers. Based on the teachings of Sogyal Rinpoche and The Tibetan Book of Living and Dying, together with insights drawn from hospice experience, we offer an integrated approach for people from diverse cultural and religious backgrounds.

Book: The Tibetan Book ofSogyal Rinpoche is the author of the highly-acclaimed and ground breaking book, The Tibetan Book of Living and Dying. Over 1.6 million copies of this spiritual classic have been printed, in 27 languages and 54 countries. It has been adopted by colleges, groups and institutions, both medical and religious, and is used extensively by nurses, doctors and health care professionals.