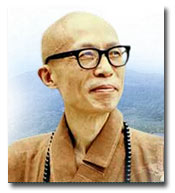 DDM’s mission is to “uplift the character of humanity and build a pure land on earth.” In order to implement this ideal, we advocate the protection of the spiritual environment and the fivefold spiritual renaissance, as well as the three types of education: education through academics, education through public outreach and education through caring service. In addition, DDM offers various programs to meet the spiritual and educational needs of people at all stages of their lives. Some of these programs include international Buddhist conferences, ecological seminars and lectures, social welfare programs and meditation retreats.

Biographical note: He was born on a farm near Shanghai in early l931 and joined a nearby Buddhist Chan temple as a monk at 13. Unhappy that he was assigned to do mainly ordinary chores every day in the first two years, he ran away and joined the Buddhist Academy at Ching-an Monastery in Shanghai, where he had his first chance to hear inspiring teachings from Chan Master Xu Yun and Master Tai Xu when they visited Shanghai.

In 1949, shortly after the Communist takeover of China, he was conscripted into the Nationalist Army and moved to Taiwan. He was a warrant officer then and served as a telegraph operator.In the army, he continued his studies in Buddhism and meditated daily. He also used his leave to visit various monasteries.

After 10 years of military service, he retired from the army and resumed monastic life in 1959 at the Buddhist Culture Center in Beitou, in suburban Taipei. In that year, he met his first real master, Ling Yuan, in southern Taiwan and learned the methods of experiencing peace, tranquility and happiness in life.

He was a disciple for two years under Master Tung Chu, a heir to both the Lin Chi and Tsao Tung sects of Chan Buddhism, before going into solitary retreat in the mountains for six years from 1961 to 1968.

At 38, he went to Japan to pursue further education to pave the way for future Dharma preaching. He received a master’s degree in 1971 and a doctorate in Buddhist literature in 1975 from Rissho University.

Two years later, he became the abbot of The Temple of Enlightenment in New York and started to teach Buddhism in the United States. In the following years, he conducted more than 140 group meditation retreats in the United States, the United Kingdom and Europe, using his teachings to help practitioners achieve peace and harmony of the body, the mind, the family and their careers.

With more than 1 million followers worldwide, Master Sheng Yen began to feel the need for a permanent, spacious monastery, called Dharma Drum Mountain. After spending eight years looking for a construction site, he finally succeeded in 2000.

The Dharma Drum Mountain Monastery, located in Jinshan township, Taipei County, was inaugurated in October 2005. His wish fulfilled, the master’s health showed signs of deterioration. In his final years, his devotion to Buddhist teaching never faded, and he was still planning to build a Dharma Drum University.

Master Sheng Yen received many awards from different governments in recognition of his humanitarian, cultural, and academic contributions. In August 2000, he was one of the keynote speakers in the Millennium World Peace Summit of Religious and Spiritual Leaders held in the United Nations.

He was the author of some 90 books in Chinese and over a dozen books in English. Some of his books have been translated into more than 12 languages, including French, German, Japanese, Italian, Polish, Portuguese, Russian, Spanish and Vietnamese.

Master Sheng Yen is a living gem of the contemporary Buddhist world. He is credited, locally as well as internationally, for sparking a revival of Chinese Buddhism.

His Holiness the 14th Dalai Lama once described Master Sheng Yen as “extremely modest, a true spiritual practitioner of deep and broad learning.”

Master Sheng Yen was appointed as one of the chairs of the World Council of Religious Leaders, an official unit of the United Nations to aid the Secretary General on religious matters.

An opinion poll conducted by the “Common Wealth”, a famous Taiwan magazine, selected Master Sheng Yen as one of “the 50 most influential people in Taiwan in the past 400 years.”

Master Sheng Yen has received Dharma transmission in the two major branches of Chan Buddhism, the Linji (Japanese Rinzai), and the Caodong (Japanese Soto). In genealogical terms, Master Sheng Yen is a sixty-seventh (within the Linji lineage) or sixty-second (within the Caodong lineage) generation descendant of Bodhidharma ( ?-ca. 530), the First patriarch of Chan, and the sixty-second (Linji) or fifty-seventh (Caodong) generation descendant of Hui-neng (638-713), the Sixth Patriarch of Chan.