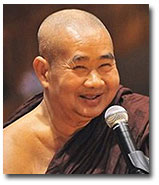 The Most Venerable Pa-Auk Tawya Sayadaw Bhaddanta Acinna (“the Sayadaw”), is the Abbot and principal teacher of Pa-Auk Forest Monastery, Mawlamyine, Myanmar. There are several branches of Pa-Auk Meditation Centers (PAMC) around the world which Sayadaw is the Spiritual Patron.

Biography:  Born in 1934, the Sayadaw was ordained as a novice monk at the age of 10. During the next decade, he studied the Pàli Texts under famous teachers of the time, and passed the three levels of Pàli language examinations (Primary, Intermediate and Higher levels), while still a novice. In 1954, he received his higher ordination as a bhikkhu at the age 20. He passed the prestigious Dhammàcariya examination which confers the title of Dhamma Teacher in 1956, at the age of 22.

Commencing in 1964, the Sayadaw began to practise forest dwelling during his tenth vassa (three month rains retreat). While continuing his study of the Pàli Texts, he sought out and gained instructions from eminent meditation teachers in Myanmar of those times. Since then, the Sayadaw has practised meditation as much as he could while living a simple life till this day. In 1981, he came, in response to the request by the then dying abbot of Pa-Auk Tawya, and became the Abbot of the Monastery. He subsequently went on to found the Upper Monastery.

It has been the lifelong aim of the Sayadaw, and the mission of Pa-Auk Tawya, to promote and propagate the Buddhasàsana, the teachings of The Buddha through pariyatti (study), pañipatti (practice), pañivedha (realization). As advised by The Buddha, learning goes hand-in-hand with practice, and practical experience of that knowledge leads eventually to the realization of it.

Since 1983, monks and laity have been coming to Pa-Auk Tawya to learn and train in meditation under the Sayadaw. Foreign meditators began to arrive at the Monastery in the early 1990’s.

The Sayadaw speaks fluent English, and he has given Dhamma talks and led meditation retreats internationally since 1997. These include Sri Lanka, Hong Kong, China, South Korea, Singapore, Malaysia, Taiwan, Japan, United Kingdom and the United States of America. In December 2006, the Sayadaw travelled to Sri Lanka to undertake a long-term personal retreat, staying in seclusion and suspending his teaching schedule throughout 2007.

In 1997, the Sayadaw published his magnum opus, a five-volume tome titled Nibbànagàminipañipadà (The Practice that Leads to Nibbàna) in Burmese. This has been translated into Sinhala. A number of smaller books by the Sayadaw have been published in Burmese. Also published are a number of books comprising re-edited translations of Burmese texts into English. For books in English and in Chinese and other foreign languages, please refer to Books.

In public recognition of his achievements, the government of the Union of Myanmar awarded the Sayadaw the title Agga Mahà Kammaññhànàcariya (Highly Respected Meditation Master) in 1999.