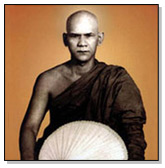 Biography: b.1904 Seikkhun, Myanmar (Burma). Started training age 6, novice age 12, full ordination 19 under Sumedha Sayadaw Ashin Nimmala. By age 22 had passed 3 grades of Pali examinations, studying under a number of important monks. Was invited to Taungwainggale monastery to help teach and during this time, became deeply involved in the study of the Mahasatipatthana sutta and Vipassana meditation. In 1938 went to well-known Vipassana teacher Mingun Jetavan Sayadaw to study and showed remarkable progress, also passing his Dharmachariya (teacher of the Dharma) examination in 1941. After this, returned to Mahasi monastery in his home village of Seikkhun and gradually became known as Mahasi Sayadaw (the Venerable from Mahasi).
Mahasi Sayadaw’s reputation soon spread. In 1948 he was invited to Rangoon to be the spiritual patron of the Buddhasasana Nuggaha Association and the abbott and teacher of the association’s head temple, the Sasana Yeiktha. Both of these had recently been created especially for him. His meditation techniques and courses rapidly became popular and his reputation spread through Asia. In 1954/1955 the Burmese Government invited the Theravada community of Thailand, Laos, Cambodia, Burma and Sri Lanka to the Sixth Buddhist Council in Rangoon, and Ven. Mahasi played a major role in events. His prowess and fame as a translator was also growing and he published a number of excellent scholarly retranslation of scriptures.

By this time, Mahasi Vipassana groups had started in several neighboring countries. In 1952 Ven. Mahasi toured Thailand, Sri lanka in 1955 and 1959, Indonesia in 1955 (?), India/Nepal in 1979,80,81. A number of Western students (such as Joseph Goldstein and Sharon Salzberg) who had attended courses at the Sasana wrote books (see below) about their experiences, and this resulted in tours to England, Europe and America in 1979 and 1980. These were exhausting tours of several months, yet the Mahasi, at the age of over 75, continued to demonstrate his commitment and energy. Each tour resulted in the establishment of many new centres and affiliated temples.

Ven. Mahasi passed away on the 14th of August 1982 shortly after returning from another tour of India and Thailand. He is succeeded by many dedicated students, and from 1984-1996 the Sasana organisation undertook twenty-two teaching missions to the West. Among the most important teachers are: Sayadaw U Pandita, Sayadaw U Lakkhana, Sayadaw U Janaka and Sayadaw U Silananda. Other students in this lineage include BuddhaNet’s founder Ven. Pannyavaro: [Lineage]: (Mahasi Sayadaw › U Janaka › Ven. Pannyavaro)

Comment: The tradition started by Ven Mahasi Sayadaw is one of the most active of all recent Theravada revivals and is of great importance in Burma and the East, as well as the West. Probably several million people have been to centres or courses. The organisation has a loose structure with the unification being in the teachings and lineage rather than in administration or a large centralised organisation.

Particular teachings: Vipassana meditation according to the Mahasatipatthana sutta.

Centres: Check Buddhanet listings for your area or visit the Mahasi Web site

Teachers: Some of the main teachers are listed above. In the lineage of Mahasi, two important teachers are:

Upon death of Mahasi in 1982, was elected principal preceptor of Buddha Sasana Nuggaha Organization. Headed main Mahasi temple them moved to his own meditation centre. Has made many visits to the West and is head of many temples and centres here.

Sayadaw U Pandita’s main website is at Saddhamma foundation: www.saddhamma.org 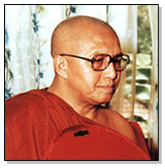 b.1928, novice age 15, fully ordained age 19, this gifted scholar became a lecturer in Buddhist scriptures at Mandalay Mahavisuddhayone University before (1954/5) becoming an editor and reciter of Pali texts for the sixth council. Studied Vipassana under Mahasi Sayadaw 1953/4.

1957 commenced six years in Sri lanka where he continued his Pali and scriptural studies and passed the London GCE A levels. !967 returned to Burma as meditation teacher at Mahasi Sasana Yeiktha.

In 1979 took up residence at Chanmyay Meditation Centre, constructed for him by devotees, and is often known as Chanmyay Saydaw. 1979/80 accompanied mahasi on missions to the West and has since then made over twenty missions.

Email: [Buddhanet only has an email for the USA site]: webteam@mahasiusa.org

Books/ Publications (Bold indicates a recommended text in that tradition)

The Heart of Buddhist Meditation: Satipatthna: A Handbook of Mental Training Based on the Buddha’s Way of Mindfulness, With an Anthology of Relevant by Nyanaponika, Nyanaponika Thera.

4) Books by students in the lineage of Mahasi (please note that many free texts are available from Mahasi tradition centres. Buddhanet also has a very comprehensive collection of Insight Meditation Resources online, from meditating with one’s children to advanced exercises).

In This Very Life : The Liberation Teachings of the Buddha by Sayadaw U. Pandita, Kate Wheeler (Editor), Venerable U. Aggacitta.