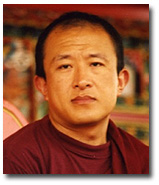 Dzongsar Khyentse Rinpoche founded Siddhartha’s Intent, an international Buddhist association of non-profit centres, most of which are nationally registered societies and charities, with the principal intention of preserving the Buddhist teachings, as well as increasing an awareness and understanding of the many aspects of the Buddhist teaching beyond the limits of cultures and traditions.

In 1993, he founded the secular White Lotus Charitable Trust, dedicated to serving the most neglected and forgotten children through education. Volunteering his own time and resources to establish the initial infrastructure, Khyentse Norbu inspired others around the world, regardless of spiritual traditions, to help White Lotus become a global volunteer network of like-minded humanists. International followers of his work and his vision founded their own networks the United Kingdom, Canada, Australia, Germany, France, Hong Kong and Taiwan with a view to supporting LO programs in India and Cambodia.

In 2001 Khyentse Foundation was founded by Dzongsar Khyentse Rinpoche. It is a non-profit organization with the stated goal “to act as a system of patronage for institutions and individuals engaged in the practice and study of Buddha’s wisdom and compassion.” In 2002, Lotus Outreach was incorporated as a 501(c)(3) non-profit in southern California to create an American center of infrastructure, dedicated to ensuring the education, health and safety of at-risk and exploited women and children in India and Cambodia.

\Its all-volunteer International Board of Directors continues to raise funds and increase awareness in their home countries on issues surrounding poverty and exploitation in Asia. .

Lineage: At the age of seven he was recognized as the third ‘mindstream emanation’ (Wylie sprul sku) of the founder of Khyentse lineage of Tibetan Buddhism. The first incarnation was Jamyang Khyentse Wangpo (1820–1892), who helped found the Rimé or ecumenical school of Tibetan Buddhism, centred in Dzongsar Monastery in Sichuan. Followers of this non-sectarian school sought to identify and make use of the best methods from the various long-competing and isolated schools of Tibetan Buddhism. This approach led to a blossoming of scholarship and writing beginning in the 1880s.The second incarnation was the renowned lama Dzongsar Khyentse Chokyi Lodro (1893–1959), who figured prominently in the export of Tantric Buddhism to the West as the root-teacher of a generation of influential and forward-thinking lamas.

Biography: Dzongsar Jamyang Khyentse Rinpoche was born in Bhutan in 1961. Until the age of twelve Khyentse Norbu studied at the Palace Monastery of the King of Sikkim. Reflecting the unusual non-sectarian tradition of the Khyentse lineage, he counts as his root-masters teachers from all four main schools of Tibetan Buddhism (cf. Sakya, Geluk, Nyingma, Kagyu). He has studied with some of the greatest contemporary masters, particularly H.H. Dilgo Khyentse Rinpoche. After leaving Sikkim he studied at Sakya College in Rajpur, and later attended London’s School of Oriental and African Studies. From a young age he has been active in the preservation of the Buddhist teaching, establishing centres of learning, supporting practitioners, publishing books and teaching all over the world. Dzongsar Khyentse Rinpoche supervises his traditional seat of Dzongsar Monastery and its retreat centers in Eastern Tibet, as well as his new colleges in India (in Bir and Chowntra (Himachal Pradesh)) and Bhutan. He has also established centres in Australia, North America and the Far East.

A biographical portrait of Dzongsar Khyentse Rinpoche exists in documentary feature film form. The film came out in 2003, and is called Words of My Perfect Teacher after the English rendering of a famed work by Patrul Rinpoche. It is a portrait of the Vajrayana Buddhist student-teacher relationship.

What Makes You Not a Buddhist (Shambhala, 2007)

Not for Happiness: A Guide to the So-Called Preliminary Practices (Shambhala, 2012)