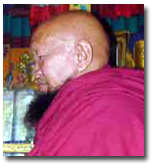 Biography: Lama Gangchen was born in western Tibet in 1941. He was recognised at an early age to be a reincarnate Lama healer and was enthroned at Gangchen Choepeling Monastery at the age of five.

When he reached the age of twelve he received the “Kachen” degree which is usually conferred after twenty years of study. Between the ages of thirteen and eighteen, he studied medicine, astrology, meditation and philosophy in two of the major monastic universities of Tibet: Sera and Tashi Lhumpo.

He also studied in Gangchen Gompa, Tropu Gompa and Neytsong Monastery. He was disceple of some of the most important Gelugpa Lamas like H.H. Trjichang Rinpoche. In 1963, he went into exile to India where he continued his studies for the next seven years at the Varanasi Sanskrit University in Benares. In 1970, he received the Geshe Rigram degree (similar to a Ph. D.) from Sera Monastic University situated in South India.

After his graduation, he worked as a Lama healer among the Tibetan communities in Nepal, India and Sikkim, during which time he saved the lives of many people and was named private physician to the Royal Family. In 1981, Lama Gangchen visited Europe for the first time and has since become a resident and Italian citizen. In the same year, he also established his first European center: Karuna Choetsok in Lesbos, Greece, where he planted a bodhi tree in the ‘Buddha Garden’, and where he consecrated what was to become the first in a long line of World Peace Buddha Statues, thankas and images.

Comment: Since 1982, he has travelled extensively, both healing and teaching worldwide, leading many pilgrimages to some of the most important holy places of different religious and spiritual denominations in the world. Since many years Lama Gangchen promotes a very important project: the integration between Tibetan Medicine (an incredible and unlikely still unknown treasure of humankind) with allopathic medicine.

Lama Gangchen is the holder of an ancient and unbroken lineage of Tantric Masters dating from the time of Shakyamuni Buddha. His Ngalso Tantric Self-healing is based on Buddha’s teaching but it’s suitable for modern people.

Main Offices and Centers around the World: http://www.peacenvironment.net/1lgwpf/centres.html

At present he has more than 100 Inner Peace Education centres or Self-Healing Study Groups worldwide.

]The Lama Gangchen Peace publications was registered in Milan/Italy in January 1995 in order to publish books on Inner Peace Education and Environmental Care. The L.G.P.P. collects and prepares Lama Gangchen’s materials for publication. Already published: