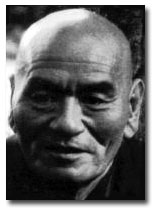 The Association brings together practitioners and dojos from Europe and beyond who adhere to Master Deshimaru’s teaching and to membership in the Soto Zen school. This represents more than 200 dojos and practice centers worldwide, though principally in Europe.

Since its conception, the Association has facilitated the organization of many sesshin (intensive practice retreats) and other practice-related events, as well as the traditional ango (summer retreat) which is practiced annually by all Buddhist communities around the world.

Biography: Born in the Saga Prefecture of Kyushu in 1914 of an old Samurai family, Taisen Deshimaru was raised by his grandfather, who was a Samurai Master before the Meiji Revolution, and by his mother, a devout follower of the Buddhist Shinshu sect. Though, unlike Kodo Sawaki before him, Deshimaru had a happy childhood, he was nonetheless tormented, even at an early age, by this ephemeral world of birth and death. Nembutsu, as practiced by his mother, did not fulfill him. Nor, finally, did his long study of the Christian Bible, under the guidance of a Protestant minister. Deshimaru’s contacts with theologians and priests left him unsatisfied, for Christianity, which had first captured his full attention, seemed in the long run to be hopelessly lost in abstract poetic imagery. It lacked, for him, the practical, while contemporary education (Deshimaru was graduated from the University of Yokohama), confined within its time-conditioned concepts, lacked the spiritual. In his search for a means to set his mind at rest, Deshimaru left off his study of Christianity and returned to his own religion-that of Buddhism. Consequently, he came into contact with the Rinzai teachings. Eventually becoming dissatisfied with Rinzai as well and feeling unfulfilled in his work as a businessman, Deshimaru began a series of meanderings which eventually led him to the Soto Master Kodo Sawaki.

Arriving for the first time in the Master’s hermitage, he found Kodo Sawaki sitting erect on a cushion with his back to the door. Overcoming his initial shock-the Master was sitting in the perfect posture of the Buddha, and this alone left Deshimaru momentarily speechless-he addressed the man. Kodo Sawaki did not reply, and Deshimaru was left standing awkwardly in the doorway. He repeated himself, and again (as when Eka addressed Bodhidharma in their first encounter) there was no reply. But unlike Bodhidharma, who left Eka standing for two days before answering, Kodo Sawaki finally said: “I have been waiting impatiently for your visit.” The Master uttered these words without turning to his visitor, without the slightest movement, without even lifting his eyes.

With the great joy that is felt when one’s wanderings have come to an end and one has found a true Master, Deshimaru did gassho, and in that moment he became Kodo Sawaki’s disciple.

Following directly in his Master’s footsteps, he devoted himself, body and mind, to the practice of Shikantaza. However, after the Japanese attack on the American base at Pearl Harbor, circumstances obliged the disciple and his Master to part company – we will certainly lose the war,” Kodo Sawaki said at their leave-taking. “Our homeland will be destroyed, our people annihilate . . . and this may be the last time we see one another. Nevertheless, love all mankind regardless of race or creed.”

Deshimaru was being sent on a dangerous mission over enemy waters, and the Master knew this, and so he removed his old Rakusu (a material worn over the neck and breast, symbolic of a Kesa) and gave it to his disciple, along with his notebook containing the Shodoka. “Respect and have faith in what I have given you,” said the Master, “and you will have good karma.”

Deshimaru, whose job it was to direct a Japanese-controlled copper mine off Indonesia, shipped out in a convoy of freighters and destroyers. However, once they were beyond Japanese-controlled waters, submarines of the United States Navy made devastating attacks on the convoy, sinking one ship after the other. Deshimaru’s freighter was carrying a cargo of dynamite, and whenever a torpedo skirted the bow or the stern, crew members, beyond themselves with fear, plunged blindly overboard. The ship was in the hands of a capable captain, however, and so Deshimaru sat on the forecastle below the captain’s cockpit in the perfect full lotus. He sat, calmly and erect, on a case of dynamite. Forty days later Deshimaru’s unarmed freighter pulled into the Mekong and threw anchor. Of a convoy of fifty-one ships, his alone arrived at its destination. The freighter, incidentally, was called The Supreme Law of the Buddha.

Finding himself on the island of Bangka, off the coast of Sumatra, Deshimaru taught the practice of zazen to the Chinese, Indonesian and European inhabitants. However, saddened and depressed by the comportment of his own people (the Japanese Army of Occupation was indiscriminately torturing and executing large numbers of the local inhabitants), Deshimaru actively took up the Bangka people’s cause. Tagged as a resistance fighter against the Imperial Japanese Army, Deshimaru was thrown into prison. Despite malaria, the intense heat, the flies, the filth, the lack of food and water, and his scheduled execution, the man sat facing a wall in his cell, with his Master’s Rakusu about his neck.

Directly before the mass execution was to take place, word arrived from the highest military authorities in Japan, and Deshimaru, along with all those awaiting execution with him, was set free. (The Japanese Military Tribunal that convened after the war ordered the execution of all those responsible for the Bangka Affair).

Recovered from a life-and-death bout with malaria, Deshimaru again set sail, this time for the island of Billiton, where he was to direct a Dutch-captured copper mine. His ship had hardly set out when American fighter planes swept down on it. Their rockets scored direct hits, and Deshimaru, who was sitting on the bridge in Shikantaza, was hurled clear of the sinking ship and into the sea. Utterly alone, and without a life jacket-with nothing, in fact, except the old Rakusu and notebook on him-he remained afloat for a day and a night. Discovered eventually by a Japanese PT boat, Deshimaru was pulled to safety Though his clothes were torn and half gone, the Rakusu came out intact. And the Master’s notes, written in ink, were as fresh and clear as when they were first penned.

When the war was finally over, Deshimaru was taken prisoner by the Americans and incarcerated in a prisoner-of-war camp in Singapore. After many more months of hardship (corned beef rations being their sole luxury), Deshimaru, along with the other twenty thousand Japanese war prisoners in the same camp, was returned to his homeland.

Deshimaru rejoined his Master and remained by his side until the latter’s death fourteen years later. He received the monastic ordination shortly before the Master fell ill, and he received the Transmission (the Shiho) while Kodo Sawaki was on his deathbed. As material evidence, the Master gave his disciple the Kesa. So the Transmission and the Kesa, handed down from Buddha to Buddha and from Patriarch to Patriarch, were passed on from Master Kodo Sawaki to Master Taisen Deshimaru in the year 1965.

“In India during the time of Bodhidharma,” said the dying Kodo Sawaki, “Buddhism was in a state of decadence. And so Bodhidharma’s Master told his disciple to take the teachings with him to the West. Likewise in Japan, Buddhism is now dead. And so you, my Dharma heir, you alone, who know the true teachings of the Buddha-take them with you to the West so that Buddhism may again flourish. All people who do zazen are my disciples.”

After burying Kodo Sawaki’s skull in the ground outside the Dojo, Deshimaru sat immobile in the perfect posture of the Buddha for forty-nine days. Then he left his homeland for the West.

– From Deshimaru, Taisen (ed. Philippe Coupey). The Voice of the Valley.

A Selection of Books by Taisen Deshimaru Roshi