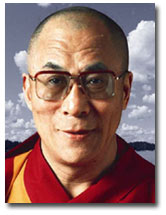 Lineage of the Dalai Lama: Tsong Khapa (1357-1419) founded Ganden monastery in 1409. A graduate of the austere Karmapa order, his doctrine emphasised monastic discipline. This attitude was echoed by his reinforcement of the primacy of sutras – the original teachings of Buddha – over the tantras – later mystical teachings. So popular was his movement that new monasteries were soon opened at Sera, Drepung and Tashilhunpo, and the sect took on the name of Gelug or “Virtuous Ones”.

During the tenure of the third Gelugpa leader, Sonam Gyatso (1543-1588), a Mongolian force invaded Tibet. When the Mongol leader, the Altan Khan, met Sonam Gyatso he was so awed as to immediately convert to Buddhism. As part of the ensuing priest patron relationship, the Khan conferred the title Dalai Lama or “Oceanic Teacher” upon Sonam Gyatso, who retroactively applied it to his two predecessors, thereby becoming the Third Dalai Lama.

In 1640, when civil unrest again arose in Tibet, the Fifth Dalai Lama, Ngawang Lobsang Gyatso (1617-1682) applied for assistance from his associates, the Mongols. It was after their subsequent pacification of the nation, that the Mongols invested him with complete political control. The Fifth Dalai Lama thereby became the spiritual and temporal leader of Tibet. So capable was he, in both temporal and spiritual realms, that this Dalai Lama is often referred to as the “Great Fifth”.

The current Dalai Lama, Tenzin Gyatso, is the Fourteenth one. Like those before him, he is held to be the reincarnation of the Bodhisattva of Compassion, Avalokiteshvara. The concept of reincarnation is fundamental to the continued lineage of the Dalai Lama. This is maintained by the discovery of a young child born soon after the death of a previous Dalai Lama. It is believed that the life-spirit of the deceased transfers to the newly found child, who takes on the pre-ordained mantle of the Dalai Lama.

Biography: A world-renowned spiritual leader, His Holiness the 14th Dalai Lama, Tenzin Gyatso, describes himself as a “simple Buddhist monk”. In his lectures and tours around the world, his compassionate nature visibly touches everyone who meets him.

He has traveled to more than 52 countries and met with presidents, prime ministers and crowned rulers of major nations. He has held dialogues with the heads of different religions and many well-known scientists. He has authored over 50 books and received over 57 honorary doctorates, awards and prizes, including in 1989, the Nobel Peace Prize.

His Holiness was born on July 6, 1935 to a farming family in the hamlet of Takster in north-eastern Tibet. At the age of two he was recognized as the incarnation of the 13th Dalai Lama, Thubten Gyatso, and was designated as the new spiritual and temporal leader of the Tibetan people.

His monastic education began at the age of six, and at 23 he was awarded the Lharampa degree (the highest level geshe degree, or doctorate of Buddhist philosophy). With China’s occupation of Tibet in 1959, His Holiness fled to northern India, where he established a Tibetan Government-in-Exile, shepherding the exile Tibetan community towards a modern democracy.

Today His Holiness concentrates on his spiritual mission and is recognized worldwide for his message of peace, non-violence, inter-religious understanding, universal responsibility and compassion.

Books authored by His Holiness the Dalai Lama