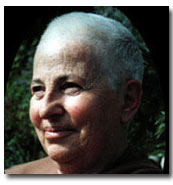 Biography: Ayya Khema was born in Berlin in 1923 to Jewish parents. In 1938, she escaped from Germany with two hundred other children and was taken to Glasgow, Scotland. Her parents went to China and, two years later Ayya Khema joined then in Shanghai. With the outbreak of the war, however, the family was put into a Japanese prisoner-of-war camp and it was here her father died. She later married, had a son and a daughter, and now has four grand-children.

Four years after the American liberation of the camp, Ayya Khema was able to emigrate to the United States. Between 1960 and 1964 she travelled with her husband and son throughout Asia, including the Himalayan countries, and it was at this time she learned meditation. Ten years later she began to teach meditation throughout Europe and Australia. Her experiences led her to become a Buddhist nun in Sri Lanka in 1979, when she was given the name of ‘Khema’ (Ayya means Venerable) meaning safety and security.

She helped to establish Wat Buddha-Dhamma, a forest monastery in the Theravada tradition, near Sydney, Australia, in 1978. In Colombo she set up the International Buddhist Women’s Centre as a training centre for Sri Lankan nuns, and the Parappuduwa Nun’s Island at Dodanduwa. (now unfortunately closed). She was the spiritual director of Buddha-Haus in Germany, established in 1989 under her auspices. In June 1997 “Metta Vihara”, the first Buddhist forest monastery in Germany, was inaugurated by her, and the first ordinations in the German language took place there.

In 1987 she co-ordinated the first international conference of Buddhist nuns in the history of Buddhism, which resulted in the setting-up of Sakyadhita, a worldwide Buddhist women’s organisation. H.H. the Dalai Lama was the keynote speaker at the conference. In May 1987, as an invited lecturer, she was the first ever Buddhist nun to address the United Nations in New York on the topic of Buddhism and World Peace.

Ayya Khema has written twenty-five books on meditation and the Buddha’s teachings in English and German; her books have been translated into seven languages. In 1988, her book “Being Nobody, Going Nowhere” received the Christmas Humphreys Memorial Award.

Ayya Khema drew her last breath on November 2, 1997 at Buddha Haus, Mittleberg Uttenbull in Germany after a brief illness.

Comment: Ayya Khema (1923-1997) was the first Western woman to become a Theravadin Buddhist nun. She has served as a model and inspiration for women from all the Buddhist traditions who have sought to revive the practice of women’s monasticism in modern times. Founded women’s Buddhist organisations. Renown as a teacher is widespread.

[English speakers are advised to navigate by searching Google.com and clicking English translation]

I was ordained as a Nun in Sri Lanka in 1985 with Venerable Piyaratana, the Chief Monk of Polgasduwa Island Hermitage as my Preceptor, and Ven. Ayya Khema as my Teacher. I lived at Parappuduwa Nuns’ Island and in several towns in the south of the country during my ten years in Sri Lanka. My senior companion nun during that time was Sister Dhammadinna, a Sri Lankan. In 1994 I was able to fulfill a long-standing wish and went on pilgrimage to the Holy Places in India for six months. Later, at the invitation of Venerable Ajahn Sumedho, I spent a year at Amaravati, his monastery in England. In 1997 I returned to Australia, hoping to be able to contribute to making the teachings of the Buddha available in my home country.

Leigh Brasington: has been practicing since 1985 and is the senior American student of the late Ven. Ayya Khema. She confirmed Leigh’s practice and requested that he begin teaching. Leigh assisted Ven. Ayya Khema’s teaching on retreat since 1994, and continues to teach in Europe and North America.