Should Monks Surf the Internet?

Should monks surf the Internet? Is spreading the Dhamma electronically sacrilegious? Is a computer just a glorified typewriter or tablet? It is not as if Buddhists are any more technophobic than any other members of the religious community are, but there needs to be an acceptance of computers and new technology as we enter the twenty-first century, which isn’t necessarily apparent at the moment.

What is happening now is that we have new tools and more sophisticated ways to spread the Dhamma. So now monks, who have always had the role of teachers and scholars, are becoming increasingly computer literate. So it is the cyber monk, skilled in the new medium of the Internet, that will take the Buddha-Dhamma into the twenty-first century and beyond. 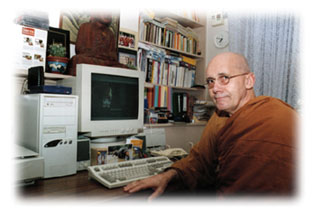 Monks and computers are still a novel combination. For traditional lay Buddhists that can pose a dilemma, especially if the monk’s lifestyle is perceived only as reclusive. So when you put monks and technology together, some traditional Buddhists have problems with it. There tends to an uncomfortable view of a monk using a computer. I, as a “cyber-monk”, have found myself telling and sometimes reassuring people that I do not play computer games! I often get a distinct feeling of disapproval, as there seems to be the misconception that using a computer somehow conflicts with or goes against the Vinaya. Well of course there were no computers at the time of the Buddha, but is a computer any different than more traditional forms of communication? Is there any difference between typing a word document and writing with a quill on a parchment? Surely it’s the content that is more important.

But only rarely have I experienced outright hostility: Once a long-time supporter came to my office and watched me at work. I could see that she was disturbed about something, in fact she seemed to be very upset. Suddenly she said, “Your computer screen is dirty!” And then as she stormed out, added “…and so are your glasses!”

If anybody can set up a Buddhist web site and present what they believe to be the Buddha’s Dhamma, is it the true Dhamma? Where is the guarantee of authenticity, the orthodox may ask? Well fortunately nobody can control the Internet so all sides and opinions are expressed equally. It is this freedom that makes the Internet flourish as a true global village without the dictation of any one religion or politically motivated party (not even Bill Gates!). Therefore, the Dhamma, as always, can only be recognised through the genuine experience of individual practitioners and not by any arbitrary authority.

The Internet, with its worldwide connectivity, will eventually globalise the Dhamma and free it of all its cultural accretions. Here then is an opening for Buddhism to re-express its essence, freeing itself from the institutional grip and the irrelevancies of non-Buddhist cultural practices. The new ‘cyber temple’ will become the meeting place for an online Buddhist community of practitioners, as is already happening in the newsgroups and chat channels worldwide. As the infrastructure improves on the net the dataline to the virtual Buddhist community could bring about a renaissance of Buddhism. The idea of Buddhism on the Internet does not threaten or compete with the ancient understandings – it can only make it more accessible and enhance the original teaching, providing an international forum for discussion and education.

The content of the Internet already offers a limitless ocean of information on the Buddha-Dhamma in the form of text based web pages. But increasingly the Dhamma be will be experienced through multimedia, most probably as Web/TV. This means that Buddhist material will be presented in a multimedia context making it more accessible and interesting to the average user and Buddhist student. Buddhism on the Internet will become a powerful communication tool. It gives us new ways of interacting with the world.

The inevitable globalisation of Buddhism, which is happening in business and commerce, will be accelerated by the new medium of the Internet. Why, therefore, are we not now putting the resources into this new medium? How many more temples, stupas, big Buddha statues, etc do we really need? Can we not now see the merit in supporting Buddhist web sites / CD-ROMs for spreading the Dhamma to the office and / or lounge room?

Who has the commitment to keep alive the Buddha’s teachings? In the past it has typically been the monks and scholars with specialised training in the Dhamma. Traditionally they have preserved and spread the Teachings. But 21st century Buddhism will be left behind as a museum piece if we do not harness ourselves to the new technologies and the Internet. Who will be the Buddhist web masters – the teachers on the Internet? It will be the computer literate monks and nuns, the Cyber Sangha who will provide the dataline to Enlightenment.

I for example, as a Buddhist monk, who after some years of intensive meditation practice and study in Thailand, Burma and Sri Lanka returned home to Australia and established a meditation centre in Sydney about six years ago, without the traditional support.

I started to use computers for word processing and simple desktop publishing, then, acquiring a modem started the first bulletin board service (BBS) ever run by a monk, called BuddhaNet. Naturally as the technology developed I moved with it. I progressed to the net three years ago, hand-cutting simple HTML code (web page programming language) growing naturally with the new medium. I must confess I was a beta-tester for Windows 95. BuddhaNet – the information network – joined MSN (Microsoft Network) “On Australia” later that year.

I am pleased to inform you that the BuddhaNet web site now is a successful non-sectarian Buddhist information network, which includes an online Buddhist magazine – BuddhaZine; and a very popular on-line instructional meditation section: “Insight Meditation Online” plus a section on Buddhist Studies. As a teaching monk, I give regular meditation classes and talks during the week – perhaps up to sixty people or more. But on BuddhaNet’s web site, there are over 50,000 visitor per day, and a plethora of e-mail inquires on Buddhism as well.

To tell you the truth, I think the Buddha would have been quite at home using the new technology of the Internet to propagate his teachings. There is a belief in some Buddhist traditions of a future Buddha, called Maitreya – who it is said will come to revitalise the Dhamma. Now, without being disrespectful to the romantic associations of that belief, I can not honestly see how any future Buddha, or future followers of the historical Buddha, would not naturally use the available technology and be at quite at ease surfing the Internet.

What do you think?