An Inward Journey Book comes to you as a free Dhamma book. This book is designed and published by Inward Path Publisher (IPP) which aims at disseminating the noble teachings of Wisdom and Compassion of the Buddha to a wide segment of readers through the printing of Dhamma books and booklets.

Inward Path is delighted to inform our Dhamma friends that we have release these Dhamma books for free distribution.

A SWIFT PAIR OF MESSENGERS: Clam with Insight from The Buddha’s Lips
— Bhikkhu Kinnara

Calm and insight are the two great wings of Buddhist meditation. The present work offers a fresh perspective on a timeless theme. It is lavishly furnish with extracts from the Buddha’s discourses, carefully elucidated for the modern reader. Calm and insight emerge as complementary aspects of a comprehensive approach to cultivation of the mind, together delivering the message of Truth. This meditative strategy reflects in practical form the Buddha’s radical insights into the nature of reality. Melding method with inspiration, this work embodies the principle that meticulous inquiry is the ideal foundation for true faith.

The author is a Western Buddhist monk. Since receiving higher ordination in 1994, he has lived in forest monasteries developing meditation and studying the Buddha’s teachings.

After the highly successful launching of his biography “Striving to be a Nobody” the Venerable Bhante Suvanno has given us, Inward Path, his permission to transcribe his Dhamma talks recorded in cassettes into booklets for those keen on reading his talks. This book, The Sixteen Dreams of King Pasenadi” will be the first of many to come; and is compiled by YK Leong, the author of “Striving to be a Nobody”.

This book is an explanation of the dreams of King Pasenadi and predicts the future of the world and which predictions are interestingly enough showing signs of coming to pass. The world will be in turmoil and unusual changes in climatic conditions will be prevalent. The ignorant will make up the ruling governments of the world. Sounds familiar does it not?…..

The Venerable Acara Suvanno Mahathera is the abbot of the Buddhist Hermitage, Lunas. He is also the chief monk of Mi Tor See in Penang. He is today 82 years of age and very active in propating the Dhamma. Many of his talks can be found in cassettes, CDs and VCDs. Bhante is well versed in the Tipitaka and a pioneer of Theravada Buddhism in Malaysia.

The Milinda Panha is, with good reason, a famous work of Buddhist literature, probably compiled in the first century B.C. It presents Buddhist doctrine in a very attractive and memorable form as a dialogue between a Bactrian Greek king, Milinda, who plays the ‘Devil’s Advocate’ and a Buddhist sage, Nagasena. The topics covered include most of those questions commonly asked by Westerners such as “If there is no soul, what is it that is reborn?” and “If there is no soul, who is talking to you now?” This abridgement (IJ051/01) provides a concise presentation of this masterpiece of Buddhist literature. The introduction outlines the historical background against which the dialogues took place, indicating the meeting of two great cultures-that of ancient Greece and the Buddhism of the Indus valley which was a legacy of the great Emperor Asoka.

From telephone to traffic jam meditation to the ordinary business of eating & drinking, to waking up & sleeping, Ven. Visuddhacara shares his understanding of how we can integrate mindfulness & lovingkindness into every facet of our modern life.

In this booklet (IJ048/01), Ven. Visuddhacara shares his limited understanding of this practice of mindfulness and loving-kindness with a view to encourage all of us to walk the path. A Buddhist monk of Malaysian nationality, he was born in 1953 on the island of Penang. He has been practising mindfulness meditation since 1982. He presently resides and teaches meditation in Penang besides travelling abroad to conduct retreats. (Kindly refer to above for international order)

THE PRACTICE THAT LEADS TO NIBBANA: — Sayadaw U Kundalabhivamsa

In this book (IJ017/98) Sayadaw U Kundala, drawing from the experience of many years of teaching, explains the path that The Buddha clearly mapped our 2500 years ago. He clearly and methodically, in an easy to read form, points out the benefits of practicing Vipassana meditation and the method of practice. He has then gone on to explain the five Indriya (controlling faculties) and the nine factors which sharpen the Indriya, leading one along the path to liberation as taught by The Buddha.

A strong foundation of morality and striving with ardent effort in Vipassana meditation, as taught by The Buddha, will result in progression along a clearly defined path of insight, with the final fruits being the noble and pure liberation of Nibbana. Freedom from suffering. (Kindly refer to above for international order) 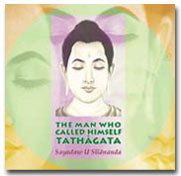 THE MAN WHO CALLED HIMSELF TATHAGATA — Sayadaw U Silananda

At the beginning of most discoursed (suttas), the word ‘Bhagava’ is commonly used to refer to the Buddha to mean ‘World-honored One’ or simply ‘Lord’. However the word ‘Tathagata’ although not so frequently used, is very significant as the Buddha employs this term whenever He wishes to refer to Himself. Reading this booklet (IJ042/00), one not only gains a theoretical knowledge of the term ‘Tathagata’, but may also be inspired to work towards one’s liberation without further delay.

Sayadaw U Silananda is a renowned Buddhist scholar and meditation teacher. He is presently the abbot of Dhammananda Vihara in Half Moon Bay, California, USA. Sayadaw leads meditation retreats throughtout America and also abroad in Japan, Europe and Asia. 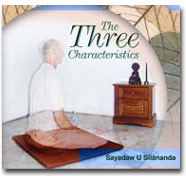 THE THREE CHARACTERISTICS — Sayadaw U Silananda

“Wherever I talk about Vipassana, I say Vipassana is seeing things in various ways, seeing mind and matter or mental and physical phenomena in light of their characteristics – seeing things as impermanent, as painful or unsatisfactory and an insubstantial or non-self. These are the three characteristics of everything that is in the world. We find these characteristics or these marks in every thing and every being – Sayadaw U Silananda.

This booklet, Rebirth: A Buddhist Concept (IJ0031/99) explains the nature of death and rebirth – how our kamma and last thought-moment can condition our next birth. Rebirth, however, is not something to be desired. It is but a recycle of suffering. It is better, therefore, to end craving which is the cause of rebirth.

The authors: Sayadaw U Thittila was one of the greatest Burmese scholar monks and missionaries of this century. Venerable Pandit P. Sri Pemaratana Nayaka Thero was the respected late abbot of the Mahindarama Buddhist temple, Penang.

Inward Path relies entirely on donations to enable us to continue to make Dhamma available for free distribution. Your kind support is warmly appreciated. If you wish to have the Dhamma books sent to you (especially International orders), kindly let us have your address. We will appreciate if you could also reimburse us for the postage (seamail) of USD10.00 (for parcel of books weight less than 2 kgs). If you are paying by cheque, kindly add extra USD5.00 to cover for bank clearing charges. Please DO NOT send CASH by mail.