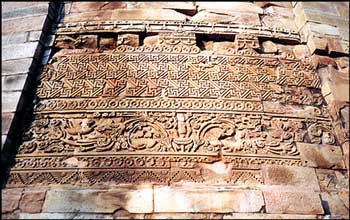 Just 13 kilometres from Varanasi is Isipathana, now called Sarnath, the deer park where the Buddha first proclaimed the Dhamma to the world. He taught two discourses here, the Dhammacakkhapavathana Sutta and the profound Anattalakhana Sutta. Both discourses are in the booklet Three Cardinal Discourses of the Buddha, Wheel No 17. Set in well maintained gardens Sarnath’s ruins are a pleasant place to stroll amongst or meditate in. The main things to see are Asoka’s pillar, the ruins of the Mulagandhakuti and the huge Dharmek Stupa. Further to the east is the modern Mulagandhakuti Vihara with its beautiful wall paintings and behind it the Deer Park. The Sarnath Museum houses some of the greatest treasures of Indian Buddhist art and should not be missed. Asoka’s lion capital and the beautiful Teaching Buddha are amongst the most beautiful sculptures ever made. It is open from 10 am to 5 pm and closed on Friday.

There are also several modern temples to see as well; the Burmese, Chinese, Korean and Thai temples, three Tibetan temples and the Japanese temple. The new Vidyadhara Tibetan Institute behind the Deer Park is particularly attractive. You can either stay in one of the numerous hotels on offer in Varanasi or better, at Sarnath itself which is quieter and cleaner than Varanasi and has a definite BuddMaphist atmosphere. You will also be able to join the chanting in the Mulagandhakuti Vihara at 6 each night. The bell announces the commencement of the service. The main places to stay in Sarnath are the basic but adequate Mahabodhi Society next to the archaeological park or the Thai temple just down from the museum. This place is clean and bright and is set in extensive gardens. One other tip. Avoid Sarnath on the weekends when there are big and very noisy crowds. During your stay in Sarnath I recommend you go into Varanasi on at least two or three occasions, it is one of the most fascinating cities in India. You can take the early bus and return in the evening. If you need to hire a vehicle try Mr Lal Nehru right next to the gate of the Thai temple; Tel and Fax 585380, Email: chrisnehrulal@yahoo.com. After your stay head for Gaya, some 200 kilometres south-east of Varanasi.