Rajgir: The scene of many important events in the Buddha's career 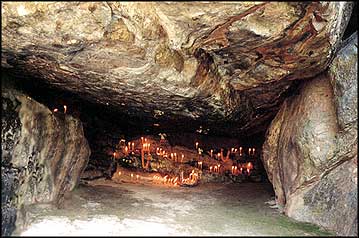 After Bodh Gaya, this town is my favourite Buddhist site in India. Its rugged peaks and sheer crags, dry forests and silent ruins evoke memories of the Buddha at almost every turn. During the Buddha’s time Rajgir, then known as Rajagaha, was the capital of Magadha and the largest city in north India. Spread out over a fairly wide area you will find the cool and shady Bamboo Grove, Devadatta’s Cave at Makdum Kund, the Sattapanna Cave where the First Council was held, Jivaka’s Mango Grove, Ajatasattu’s stupa, the Pipphili Cave where Maha Kassapa liked to stay and the Boar’s Grotto (see photo) where Sariputta was enlightened, to name but a few.

And looming over it all is the dazzling white and gold Japanese stupa on Ratana Hill. The thermal springs now built into a Hindu temple are often referred to in the Buddhist scriptures and are a good place to have a hot bath. But go in the evening when there the crowds are less and there are no brahmins to hassle you for ‘baksheesh’. Rajgir was the scene of many important incidents in the Buddha’s career but it is an important place for Jain pilgrimage as well. If you walk around the new town you’ll see numerous Jain pilgrims including monks in pure white and even the ‘sky clad’ naked ones. You will also see several large Jain temples.

When you are up on the Vultures Peak read the Mahasaropama Sutta and on the way down sit in the Boar’s Grotto and read the Dighanakha Sutta. On the way back to town stop at the ruins of the Jivaka’s Mango GrovMape and read the Jivaka Sutta. There are well maintained and peaceful gardens in the Bamboo Grove, a good place to sit and read the Abhayarajakumara Sutta, the Dantabhumi Sutta or the Culavedalla Sutta which was taught by the nun Dhammadinna. All these discourses are from The Middle Length Discourses. There are several adequate hotels around the main bus stop the best being the Anand and the Mamata but a very good place to stay is the Bengal Buddhist Association right next to the Burmese Temple. It is clean, friendly and conveniently situated. Use Rajgir [ see map ] as a base for four side trips, to Jethian, to the Indasala Cave, to Ghosrawan and to Nalanda.