Prabhosa: The hill where the Buddha spent his sixth rains retreat 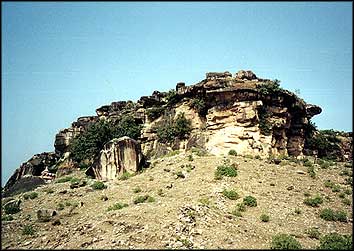 While you are at Kosambi make a point of visiting Prabhosa. This hill was known in ancient times as Mankula and is where the Buddha spent his sixth rains retreat There are no discourses in the Tipitaka taught at Prabhosa so perhaps the Buddha spent the whole stay here in silence. If so this would be quite understandable; Prabhosa is a particularly lonely and peaceful place.

The Chinese pilgrim Hiuen Tsiang came here in the 7th century and saw a stupa built by King Asoka but neither this or any other Buddhist antiquities can be found here today. There are caves and rock shelters all over Prabhosa particularly on the steeper and rockier north side.

The largest cave, now called Sita’s Window, may have been where the Buddha stayed during his visit. In later centuries it was the Jains who came to dominate PrabhoMapsa as is clear from their many inscriptions and images in the area. Climb to the top of the hill and you will get a sweeping view over the Yamuna River and the small temple town of Prabhosa nearby. About a kilometre from Kosambi the main road back to Allahabad branches to the left. Proceed along it for about 10 kilometres and you will come to Prabhosa. On your return to Allahabad take either the bus or the train to Varanasi.