Nalanda: Visited by the Buddha & site of the great Buddhist university 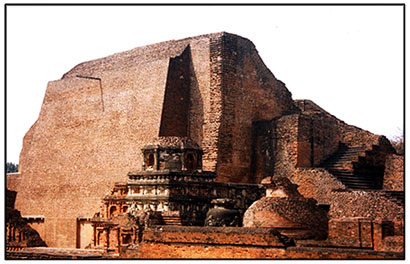 Another trip from Rajgir is to Nalanda. This small village and its surrounding area have numerous associations with the Buddha and his disciples. Sailo 3 kilometres south-west of Nalanda is where the Buddha met and converted Maha Kassapa, the man who was later to become his successor. A large statue of Kassapa with an inscription on it was found in the village in the early 1900’s but unfortunately its whereabouts is now unknown. The village of Kul some 1.5 kilometres south-east of Nalanda is the Kolita of old and the birthplace of Moggalana, the second of the Buddha’s two chief disciples. Nalanda itself was often visited by the Buddha during his numerous sojourns through Magadha and he taught several important discourses there.

In about the 5th century CE a monastic university was established at Nalanda that was eventually to develop into the greatest ancient centre of Buddhist learning. Students from China and Korea, Sri Lanka and Indonesia and from all the regions of India came to Nalanda to study. When Hiuen Tsiang was studying at Nalanda in the 7th century there were 1510 teachers and 8500 students. The Tibetan pilgrim Dharmasvamin was here in 1234 and has left an a gripping account of the monastery’s destruction by the Muslims.

The most interesting of the extensive ruins of Nalanda are the huge Temple 3 and Temple 3 with its calved panels. The ruins are surrounded by beautiful gardens, a good place to sit and read the Kevaddha Sutta from The Long Discourses. Across the road from the entrance to Mapthe ruins is the Nalanda Museum which has a large collection of images and artefacts found at Nalanda. Nalanda is only 11 kilometres north of Rajgir just off the main road and can be reached by local bus. If you arrive at 9 am when the museum opens this will give you plenty of time to see everything and get back to Rajgir before the afternoon heat. There is a good guidebook to Nalanda published by the Archaeological Survey of India but every time I have inquired at the museum about it they have only had the guide book to Ajanta, a place about 900 kilometres south-west of Nalanda. Perhaps the Nalanda guide book is only available at Ajanta. After your stay in Rajgir take the bus north to Patna.