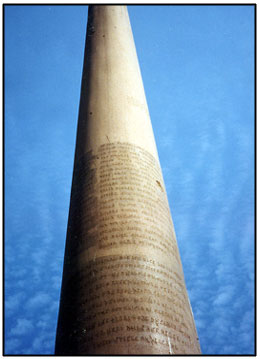 About 22 kilometres north west of Bettiah is the small town of Lauriya Nandangar. King Asoka is believed to have raised some forty pillars but the only one that still stands complete and in its original location is in this village. Rising to just over 12 meters high and still exhibiting a remarkable polish despite centuries of exposure to the elements, it is a most impressive monument. Six of Asoka’s edicts issued in 244 BC are inscribed on the pillar and a crouching lion sits on its top. It is a fine piece of sculpture but its face is missing, having been shot at with by a cannon in 1660. For a translation of the edicts on the pillar read The Edicts of King Asoka, Wheel No 386/387.

The other thing to see in Lauriya Nandangar is the huge stupa located behind the local sugar mill. Although now only 24 meters high it has a circumference of nearly 457 meters, making it one of the biggest stupas ever built in India. It must have been built to commemorate some Mapimportant event or enshrine some precious relic, but what it was is no longer known. There are hotels in Bettiah and Motihari but you’ll need to lower your standards to rock bottom. If you are heading to Kusinara from either Vesali or after having visited the three places further north you will have to cross the bridge over the Gandak near Gopalganj where there is a decent hotel.