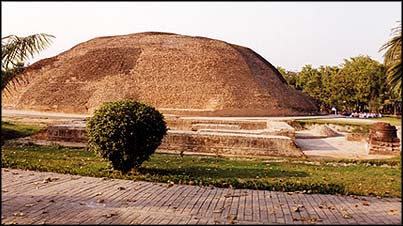 In his eightieth year the Buddha and a group of monks arrived in this small place. Ananda described it as ‘a wattle and daub town’. Exhausted and sick the Buddha was unable to go on and he laid down to rest between two sal trees. His final hours and the events that filled it are movingly described in the last part of the Mahaparinibbana Sutta which you will find in the Long Discourses. The Nirvana Temple and stupa later built over the site of the parinivana as well as the ruins of several monasteries are set in attractive and well maintained gardens. The tall slender trees on the right of the path as you enter are sal trees.
Ramabhar Stupa: The Buddha’s creamation place, Kusinara.

A little further down the road is the ruins of the stupa marking the place where the Buddha’s body was cremated. A new museum had recently been built in Kusinara but it has a very modest collection of exhibits. Of late pseudoMap monks hassling visitors for money had become a real problem at Kusinara. Don’t make it worse by encouraging them. The Tourist Bungalow opposite the ruins offers Indian standards at western prices so you might prefer staying at Burmese, Thai or Tibetan monasteries. Alternatively you can stay in Gorakhpur which you have to pass through to get to Lumbini. Try the Hotel Elora near the railway station or the nearby Standard Hotel. When you are ready to move on head for the India-Nepal at Sonauli via Gorakhpur and Nautanwa.