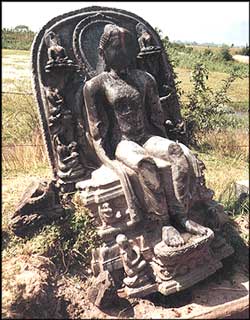 After delivering his first and second discourses at Sarnath the Buddha returned to Bodh Gaya where he preached to, converted and ordained the three Kassapa brothers and their one thousand followers. Then accompanied by this large group of new monks he went to Gaya, where he preached the Fire Sermon, and then headed for Rajgir to meet King Bimbasara. Hearing this the king and his entourage came out of the city to welcome the Buddha and the two great men met at the village of Lativana, the Palm Grove, now called Jethian. In the seventh century Jethian became famous as the seat of Jayasena, the greatest saint of the time. The Chinese pilgrim Hiuen Tsiang spent two years here studying with Jayasena.

Beside the road leading to Jethian village from the south is a large mound with a tank next to it. This is the remains of the stupa later built over the Supatittha Cetiya, the place where the Buddha stayed while at Jethian. Besides this mound is a large and impressive statue of the Buddha. A little further on at Saravoday Vidyalaya, the local school, is a statue of Padmapani and another of the Buddha found in the aMaprea.

About 3 kilometres away on the north side of Chandu Hill is a large cave called Rajpind. This must be one of the caves mentioned in the Tipitaka as being in the vicinity of Rajgir but exactly which on can no longer be determined. Numerous pigeons nest in its dark interior so perhaps it is the Kapotakandara, the Pigeons Grotto, where Sariputta sometimes used to stay. To get to Jethian turn west just before the Gaya – Rajgir road enters the mountains at Rajgir. Jethian is difficult to get to but well worth the effort.