Don: Where the Brahmin Dona built his stupa 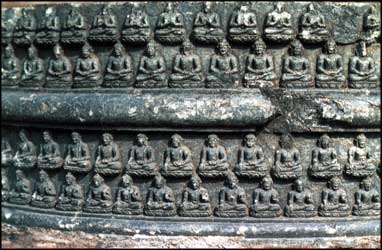 After the Buddha’s cremation a dispute arose as to how his ashes should be divided. Eventually a brahmin named Dona was given the task and he did it to the satisfaction of all the eight claimants. As a reward for his services he was given the vessel in which the ashes had been collected and from which he had divided and he announced that he would enshrine this vessel in a stupa. This stupa later became a popular destination with pilgrims. When Hiuen Tsiang went there it was already in ruins but it still sometimes emitted a brilliant light. Today Dona’s stupa is a large grassy mound with a Hindu temple on it just outside the village of Don. Nearby Mapis an exceptionally beautiful statue of Tara now being worshipped as a Hindu goddess. This statue dates from the 9th century. To get to Don go from Patna to Siwan via Chhapra . Alternatively you can visit Don as a day trip from Kusinara via Gopalganj. Beyond Siwan the road is very bad. The story about Dona’s division of the Buddha’s ashes is in the last part of the Mahaparinibbana Sutta which can be found in Walshe’s The Long Discourses. When you have finished in Patna cross the Ganges by the new Mahatma Gandhi Bridge and head north to Vesali via Hajipur.