Champanagar: Scene of several important discourses by the Buddha 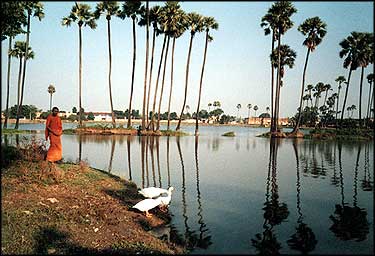 The Buddha visited Campa at least once, perhaps several times and it is the eastern most place he went which can still be identified. According to legend the city got its name from the numerous campaka trees that grew around it. The flowers of this tree are famous for their strong sweet perfume. The town on the ancient site are now known as Champanagar. The Buddha taught the Kandaraka Sutta, the famous Sonadanda Sutta and several other important discourses here.

The first is from The Middle Length Discourses and the second is from The Long Discourses. In the city was a tank called Gaggara’s Lotus Lake which was famous for the thousands of beautiful lotuses that grew in it and also because a grove of campaka trees on its banks was the Buddha’s favourite resort while in the city. A large body of water now called Sarovana Talarb represents the lake the Buddha knew. In the early 1900’s when silt was being cleared from the lake several Buddha statues were found but their whereabouts is now unknown.

Ask the locals how to get there. Champanagar is right off the main pilgrims route which means that it is a bit of a hassle getting there. On the other hand it also means that when you sit besides Gaggara’s Lotus Lake you Mapcan be certain that your contemplation wont be interrupted by postcard and trinket sellers. The best way to get to Champanagar is to take the road that follows the Ganges from Patna east to Bhagalpur, a journey of about 220 kilometres. It is probably only worth the trip if you also intend to visit the ruins of Vikramasila which are another 50 kilometres further on. Bhagalpur District is one of the most wretched and lawless in Bihar, quite an achievement, so avoid travelling at night even by car and be cautious at unofficial road blocks. Allow at least two days for this trip. Accommodation is scarce but there is a hotel opposite Bhagalpur railway station. Don’t leave your soap in the bathroom overnight as I did, the rats will eat it.