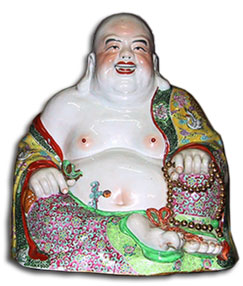 Chinese depiction: often referred to as the Laughing Buddha 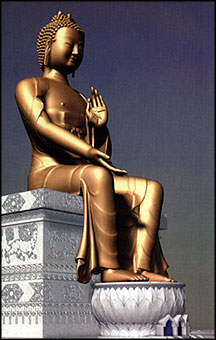 According to some Buddhist traditions, the period of the Buddhist Law is divided into three stages: a first period of 500 years, of the turning the Wheel of the Law; a second period of 1,000 years, of the deterioration of the Law, and a third period of 3,000 years (called Mappo in Japan) during which no one practises the Law. After this, Buddhism having disappeared, a new Buddha will appear who will again turn the Wheel of the Law. This future Buddha is still in the Tusita heaven, in the state of a Bodhisattva. Gautama Buddha himself will enthrone him as his successor. The name means ‘benevolence’ or ‘friendship’. He is now living his last existence as a Bodhisattva. In anticipation of his imminent arrival, he is sometimes considered as a Buddha and given the title of Tathagata.

Maitreya is the only celestial Bodhisattva recognized by the sects of the Theravada school, who represented him from the outset. His images appear in Gandhara, perhaps even before those of the Buddha (with whom he was perhaps confused): he is represented standing or seated, as an ornamented Buddha, with long thin hair on the shoulders or tied in a chignon on his head, his hands in Dharmacakra mudra when seated, or in Vitarka and Varada mudras when standing.

In Tibet, when he is represented seated, his legs hang (in the European manner) and he is clothed as a Buddha. (The image on left is of the Maitreya Project Statue being built in Bodh Gaya, India). This is the form he assumes in Java in the eighth-century temple, the Chandi Mendut. His representations abound throughout Buddhist Asia. Yet he is usually shown as a Bodhisattva, standing and adorned with jewels, rather than seated. In certain images representing him in the sky Tusita, he appears seated with his legs in Padmasana. He is recognized by wearing a small stupa in his headdress. His attributes may vary, and he may hold a vase or a wheel (cakra) placed on lotus flowers. A scarf is always tied around his waist. Sometimes an antelope skin covers his left shoulder. He often forms a triad with Sakyamuni and Avalokitesvara; in fact, in Sri Lanka, sculptures thought to depict Avalokitesvara have been reinterpreted as showing Maitreya.

In Korea and Japan, where his cult enjoyed great favour from the sixth century, he is often confused (as in China) with Amitabha and Sakyamuni. In sculpture, he was sometimes confused with Nyoirin Kannon in Japan, a form of Avalokitesvara. He was also given the name of Jishi Bosatsu, ‘He who is full of pity’. He was first likened to Kami Hachiman, a deification of the Japanese Emperor Ojin (third century), and was later considered an incarnation of Amitabha, serving as an intermediary between Gautama (the world of mortals) and Amitabha (the world of the beyond).

Acolytes of Maitreya: Asanga and Vasubandhu

Besides the triads, Maitreya is often represented with two acolytes: Asanga (Japanese Muchaku), founder of the Hosso sect, and Asanga’s brother Vasubandhu (Japanese Seshin). Tradition relates that Maitreya descended from the Tusita heaven at the request of Asanga and his brother to teach them the content of the five sutras. These two Arahants then composed many other enlightening shastras for the followers of the doctrines of the Mahayana. In Japan, Asanga is some-times called Genjo and is then confused with the Chinese pilgrim Xuanzang. Asanga lived in India, in Pataliputra (present-day Patna in the state of Bihar), with his brother in the fourth century. They are represented in the form of monks, and are given the title of Bodhisattva. In Japan, the cult of Maitreya and of his acolytes is little maintained except by the Zen and Shingon sects.