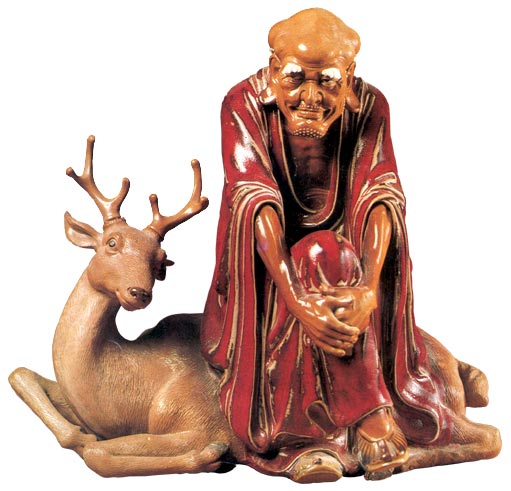 Sitting dignified on a deer,
As if in deep thought.
With perfect composure,
Contented with being
above worldly pursuits.

Pindola the Bharadvaja, from a high caste Brahmin family, was formerly a powerful government official in an Indian kingdom, highly trusted by the king. One day he suddenly decided to become a Buddhist monk and, not wanting to hear any entreaties from the king, he left to join a monastery deep in the mountains.

One day, he appeared in front of the palace, riding a deer. Recognizing him, the royal guards immediately reported to the king who came out to receive him. The king told him that he could have the position back if he wanted. Bharadvaja declined and said that he came back to ask the king to join him. After a long conversation, using various metaphors to explain the sins of the flesh and desires, he finally convinced the king, who abdicated in favour of his son and followed Bharadvaja to become a monk.