Behind the main statue in the main hall there is usually a large mural. These are added to give a clearer, more complete image of the Buddhist cosmic view to the visitor. Depending on the size and nature of the hall, murals are more or less complex arrangements of figures taken from a variety of specific, traditional designs. 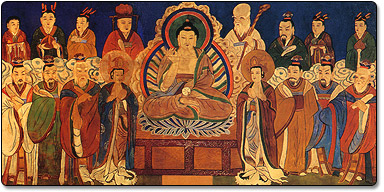 If you look closely, you will find all kinds of interesting personalities peering out. Amitabha is the most frequent central figure to be found, and usually he is shown with rays of light coming from his head. In the foreground, towards the bottom left and right corners, there are usually guardians.

Bodhisattvas are often placed nearer to the feet of the principal figure and, in the middle, there are the gods and ordinary people.

Above, often near the main Buddha’s head, there are monks. Look for an old-looking one, Kasyapa, and a younger one, the Buddha Sakyamuni’s attendant Ananda. Apart from the main mural behind the statue, there are numerous other protector paintings. These depict beings that are more human in appearance; they represent the human world of desire.

Many earth/sky gods, derived from Indian religions as well as Taoist spirits and Confucian characters, are all included in Korean Buddhist iconography.

Other popular Buddhist paintings in the main hall feature the Dragon King, who is easily identified by his outlandish eyebrows and mustache, and the Bodhisattva Tongjin. As protector of the Dharma and the Lotus Sutra in particular, Tongjin is often the centre of a protector painting and can be identified by his sword and rather ostentatiously feathered headgear.

In separate, smaller shrines look for the delightful Mountain Spirit painting. As the resident spirit long before Buddhism arrived in Korea, the Mountain Spirit is always flanked by a friendly tiger and by an attendant. Often the painting has great charm and character, as do those of the Seven Star Spirit (Big Dipper) and the Recluse.

Son Art
Son Art (Son is the Korean form of Ch’an/Zen) tries to communicate visually what speech often fails to do – the true nature of reality, the experience of which is the goal of Son. This is done through spontaneity, included in the Buddhist values incorporated in the training.

Mastering the brush may take years, even decades of persevering practice in order to achieve patience, and perfection. Then spontaneity is added… 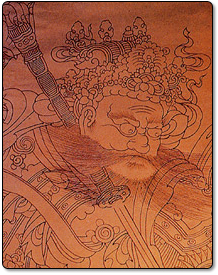 Son painting is completely unpredictable, except for Bodhidharma and the Oxherding Pictures. In Korea this abbreviated form of Buddhist art has drawn new interest in recent years.