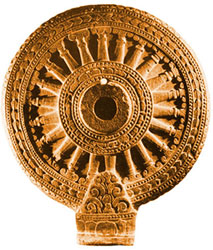 The wheel symbolise the Wheel of Buddhist Law, the endless cycle of birth and rebirth. The early Dharma Wheels followed the India tradition having many spokes as shown by this Dvaravati style from the 7th – 9th century.

Modern versions of Dharma Wheels often have four spokes, symbolizing the Four Jinas or the four ‘moments’ in the life of the Buddha; or with eight spokes, or octagonal, symbolizing the Noble Eightfold Path. The spokes sometimes extend beyond the circle, in points.

These wheels, represented in Indian art even before the period of King Asoka (272-232 B.C.E.), were generally placed on four lions, back to back, and facing the four cardinal points. 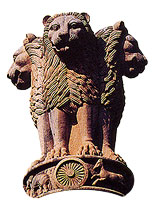